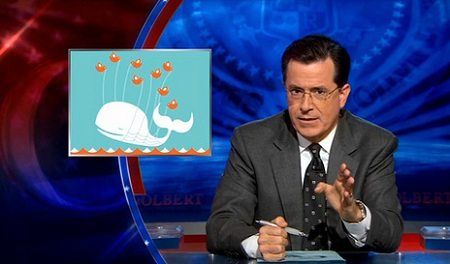 On his Comedy Central television program, “The Colbert Report” late last week, Stephen Colbert, the satirical program’s host, announced the donation of the remainder of the money raised by his super PAC during the 2012 presidential election. NPQ has previously noted the work of Colbert’s PAC, “Making a Better Tomorrow, Tomorrow” and its related 501(c)(4) social welfare group (or as Colbert called it, his “spooky PAC”) “Colbert SHH!” With the election over, Colbert’s PAC had $773,704.83 left in its coffers.

In making the announcement, Colbert took a few parting shots that were clearly directed at Republican political strategist Karl Rove. Colbert cited his PAC’s leadership by a loaf of ham with glasses on it that he referred to as “Ham Rove:” “I can’t tell you how much Ham meant to me,” Colbert said. “Well, I could, but technically, it’s a super PAC, so legally, I don’t have to—just like I don’t have to tell you where the $773,704.83 of super PAC money went.”

But Colbert did disclose that money will now be donated to several groups working on Superstorm Sandy relief: Donorschoose.org, Team Rubicon and Habitat for humanity, which will each receive $125,000, as will the Yellow Ribbon Fund for injured veterans and their families. The remainder will go to two groups dedicated to greater transparency in elections, the Center for Responsive Politics and the Campaign Legal Center. Here is the video of Colbert’s announcement:

Regular readers of NPQ will know that we have frequently lamented the donor laundering process that took place during the 2012 election cycle, a process that made nonprofit entities the handmaidens of those seeking to hide their campaign contributions. No one better lampooned the democracy-harming impacts of this practice than Colbert. With a sharp wit, the comedian offered up healthy servings of gallows humor that, if nothing else, reminded all of us who find such practices incompatible with a healthy democracy that our concerns were shared by many others who find opaque campaign finance loopholes objectionable. Now if only our elected officials can start taking some of Colbert’s satire to heart to close these loopholes before the next election. –Mike Keefe-Feldman