Marshall Strauss of the Workplace Giving Alliance attributed the drop to a “perfect storm” of problems last year, including sequestration, pay freezes, and the partial government shutdown. All in all, he said “It’s a great surprise that so many federal employees still pledged.” Additionally, he commented that he did not know whether this new low level would carry over to future years.

According to this chart from Government Executive, we have every reason to believe that this year was not an anomaly: 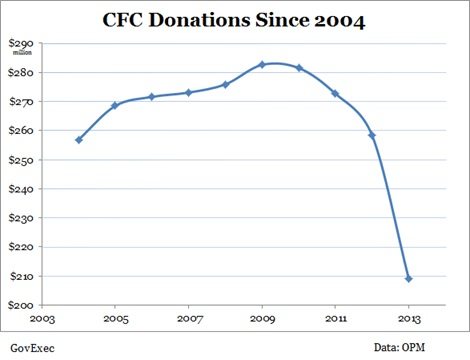 A full $10 million of the drop in donations came from the National Capital Area alone, but in terms of proportionate reductions, the Central Ohio and West Virginia CFC appeared to take the cake, with a frightening 60 percent drop from $1,469,693 in 2012 to $582,938 in 2013.—Ruth McCambridge