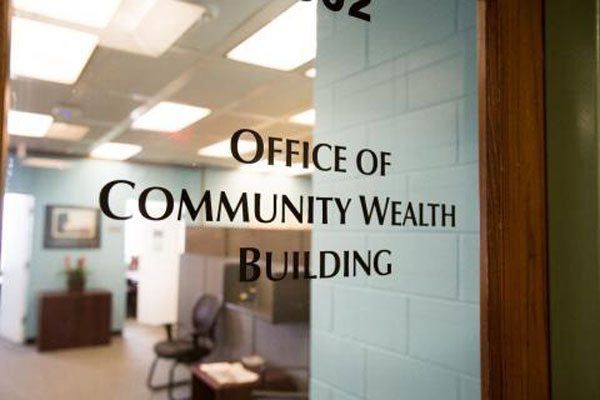 As Aaron Ross Coleman details in Next City, community wealth building, “an approach to community and economic development that creates an inclusive economy built on thriving neighborhoods and broad-based ownership,” as Christine Gianakis, press secretary for New York City’s Department of Consumer Affairs describes it, is gaining ground, both in New York and Virginia.

In New York City, a program for community wealth building is housed within the city’s office of financial empowerment—part of its Department of Consumer Affairs—and includes, as Coleman points out, efforts to “improve city neighborhoods through entities like credit unions and consumer cooperatives.”

Other cities have chosen to create a separate office to break down silos dividing anti-poverty agencies. The nation’s first Office of Community Wealth Building was created in Richmond, Virginia in 2014. Earlier this year, the city of Rochester, New York also established its own office.

Richmond launched its community wealth building office in response to the recommendations of a community-based anti-poverty commission named after Maggie L. Walker, a Black woman who chartered a bank in Richmond in 1903 to help finance Black business development and wealth building in the Jim Crow South. This fiscal year, the office has a total budget of $4 million, including $1.9 million in state funds.

The Office of Community Wealth Building aims to close the racial gap in unemployment. It has work to do. According to the office’s 2017 annual report, the city’s jobless rate is 15.7 percent for Blacks, compared to 4.9 percent for whites. The report notes that last year through its programs 1,841 residents attended trainings, with 350 receiving more intensive support.

Ending disparities is a process, acknowledges Reggie Gordon, the office’s director. “The first step is to call it out,” says Gordon. “Sixty years ago, there was intentionality around redlining and segregation that led to concentrated poverty. And here we are in 2018 receiving the byproduct of those intentional decisions….It’s up to us to be just as intentional about solving these problems.”

Richmond’s effort has spawned imitators within Virginia. In 2017, the Virginia First Cities Coalition, of which Richmond is a member, successfully advocated for a $7.5-million statewide Community Wealth Building Fund to “assist localities that undertake holistic measures designed to move individuals and families into employment and sustainability.”

The coalition currently joins together 14 cities. An analysis done in 2017 of its then-12-member cities showed that five-year poverty rates (2011–2015) among its members ranged from 15.3 percent to 25.8 percent, while childhood poverty rates ranged from 19.5 percent to 40 percent. Richmond is near the high end (25.5 percent) of the poverty range and has the state’s highest childhood poverty level, but many other Virginia cities also have poverty rates of 20 percent or above, including Charlottesville, Danville, Lynchburg, Martinsville, and Norfolk.

Richmond is a leading beneficiary of the new fund. The $1.9 million it won is slated to support pipelines for jobs at local hospitals cleaning surgical tools—which carries an industry-average wage of $17 an hour—and commercial driving jobs that also generate living wages. In Lynchburg, the city received a smaller $117,000 grant to improve access to technology jobs.

The broader vision, however, centers not just on creating job pipelines, but on closing the racial wealth gap. For its part, Richmond has identified crafting “strategies to identify and take action on bringing down the systemic barriers to wealth” and creating “interventions to decrease the racial wealth gap” as two of its top four priorities for 2018.—Steve Dubb

Disclosure: The author served as a consultant on a project for the Richmond Office of Community Wealth Building in 2015 and 2016.