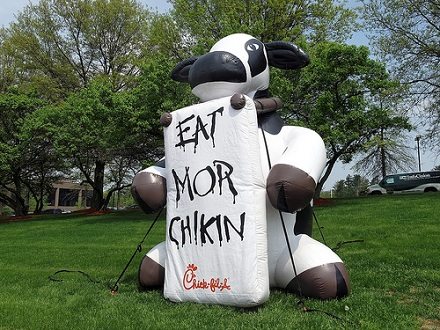 Mike Huckabee blogged about the ongoing Chick-fil-A debacle on his website on Friday:

“I talked earlier today personally with Dan Cathy, CEO of Chick Fil-A about the new reports that Chick Fil-A had capitulated to demands of the supporters of same sex marriage. This is not true. The company continues to focus on the fair treatment of all of its customers and employees, but to end confusion gave me this statement:

‘There continues to be erroneous implications in the media that Chick-fil-A changed our practices and priorities in order to obtain permission for a new restaurant in Chicago. That is incorrect. Chick-fil-A made no such concessions, and we remain true to who we are and who we have been.’”

Just when lesbian, gay, bisexual, and transgender (LGBT) fans of the Southern chicken chain thought it was acceptable to relish the delicacy openly! The LGBT community and their allies had been protesting the company’s support of anti-LGBT groups and initiatives—including those deemed hate groups by the Southern Poverty Law Center—but many thought the boycott could finally be ended when Chicago Alderman Joe Moreno said that “the restaurant has agreed to include a statement of respect for all sexual orientations in an internal document and promised that its not-for-profit arm would not contribute money to groups that oppose gay marriage.” Moreno had opposed the opening of a Chick-fil-A franchise in Chicago because of Cathy’s unabashed and outspoken stand against equality for lesbian and gay couples.

A memo released by the company seems to support Moreno’s claim, yet it also spells out up front that “as responsible stewards of all that God has entrusted to us,” the company supports programs that “strengthen families and enrich marriages.” We doubt those include programs for LGBT families and marriages of couples that happen to be of the same gender. –Erwin de Leon