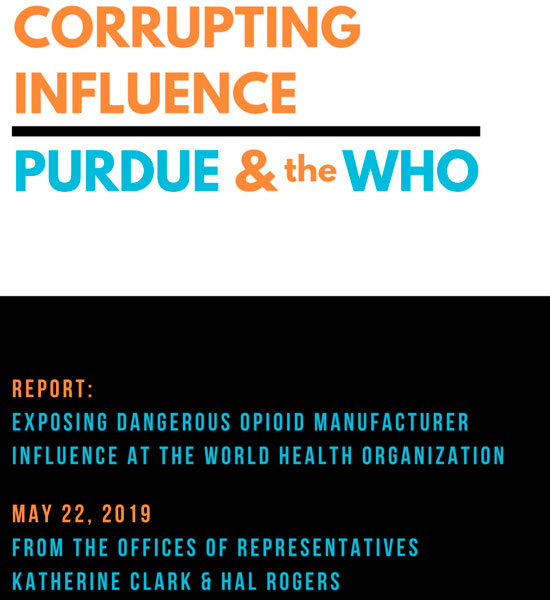 A report from the offices of congressional representatives Katherine Clark (D-MA) and Hal Rogers (R-KY) titled Corrupting Influence: Purdue and the WHO accuses Purdue Pharma of swaying the World Health Organization (WHO) to change its opioid prescribing guidelines to expand sales overseas.

The detailed report concludes that “WHO guidelines are serving as marketing materials for Purdue” and “contain dangerously misleading and, in some instances, outright false claims about the safety and efficacy of prescription opioids.” The text of the guidelines also resembles Purdue’s marketing material in ways the report calls “eerily similar.”

“The web of influence we uncovered paints a picture of a public health organization that has been corrupted by the opioid industry,” Clark says. “The WHO appears to be lending the opioid industry its voice and credibility, and as a result, a trusted public health organization is trafficking dangerous misinformation that could lead to a global opioid epidemic.”

These revelations aren’t wholly new. Two years ago, a letter from a dozen members of Congress warned WHO that they were aware that Purdue and Mundipharma International, a UK-based network of global companies also owned by members of the Sackler family, were intent on promoting opioid sales globally. This report amplifies these WHO-related concerns at a time when the Sackler family are being sued all across the country for unethically pushing doctors and other entities to boost opioid sales.

“When the WHO failed to respond to the letter,” say Clark and Rogers, “we began to question why they would remain silent about such a significant and devastating public health epidemic. The answers we found are deeply disturbing.”

The congressional report notes that a second WHO document on opioids for children warns against “opiophobia,” a term Purdue uses to condemn doctors too cautious in prescribing opioids. The report said that in publishing the documents, “the WHO gave Purdue exactly what they wanted.”

A review of those guidelines makes it clear that the “problem” the WHO seems to be addressing is not how to limit the use of these highly addictive drugs, but rather how to eliminate barriers to their use.

The report also references the role of a number of US-based nonprofits which, it suggests, acted as “front groups” for the company relative to WHO. These include organizations like the American Pain Society and the International Association for the Study of Pain.

“While the findings in this report are tragic and alarming, they are unsurprising given this company’s unscrupulous history,” Rogers says. “The WHO must take action now to right the ship and protect patients around the world, especially children, from the dangers associated with chronic opioid use.”

Purdue is strongly denying the claims in the report and says it is being vilified. —Ruth McCambridge