A report in two parts recently released by the Connecticut Governor’s Panel on Nonprofit Health and Human Services paints a dire picture of financial distress (see Part 1 here and Part 2 here). Not only did 43 percent of nonprofits end FY 2010 with a deficit, but in the case of nonprofits with budgets over $1 million, 73 percent ended 2009 with a deficit. A full 72 percent said that any unexpected increase in costs such as fuel prices or health insurance costs could force them out of business.

Recently, the Urban Institute reported that two-thirds of Connecticut’s nonprofits had frozen or cut salaries in 2009. Earlier this year, Connecticut’s Office of Legislative Research looked into the salary levels of nonprofits and reported, according to the Connecticut Mirror, that thousands of those employees “earn so little that they qualify for the state’s health insurance plan for low-income individuals.” More research is planned to see how many qualify for food stamps and other benefits.

The chart below may provide some of the explanation behind this declining state of affairs. Using 2009 numbers, The Urban Institute ranked Connecticut as the seventh worst state when it comes to reimbursements relative to cost of services. 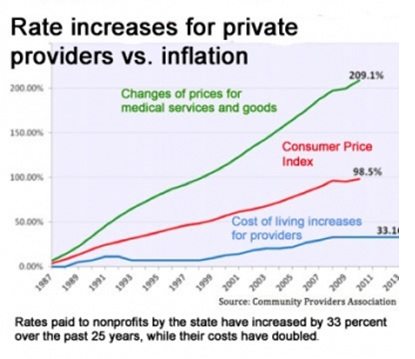