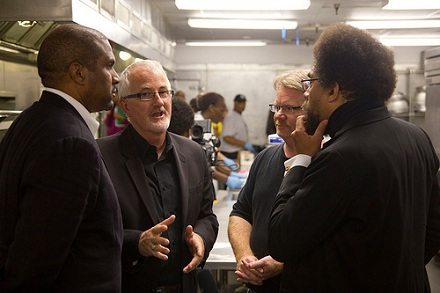 Despite some commentators’ giddy excitement about President Barack Obama’s reelection, Tavis Smiley and Cornel West took a different stand, calling out the president for some of the shortcomings of his administration and his reelection campaign on the issue of poverty. Of course, Smiley and West have their own critics, in part due to West’s occasional propensity to use highly charged language, such as his 2010 contention that Obama’s policies led to racist effects.

Speaking on Amy Goodman’s Democracy Now! show, Smiley and West tore into the president. Calling Obama “a Rockefeller Republican in blackface,” West charged “that it’s morally obscene and spiritually profane to spend $6 billion on an election, $2 billion on a presidential election, and not have any serious discussion—poverty, trade unions being pushed against the wall dealing with stagnating and declining wages when profits are still up and the one percent are doing very well, no talk about drones dropping bombs on innocent people. So we end up with such a narrow, truncated political discourse, as the major problems—ecological catastrophe, climate change, global warming.”

Smiley took on television analyst and professor Michael Eric Dyson’s assertion that Obama is not only the most progressive president the nation could have elected at this moment in history, but that he is the most progressive White House occupant since FDR. According to Smiley, “to suggest in any way that this president has been progressive or is the best example of progressivism that we could put forth in this country is just inaccurate.” Moreover, Smiley said that Obama needs to be pushed from the left, comparing Obama to other presidents: “Lincoln isn’t Lincoln if Frederick Douglass isn’t pushing him. FDR isn’t FDR if A. Philip Randolph and Eleanor Roosevelt aren’t pushing him. LBJ isn’t LBJ if MLK isn’t pushing him…We believe that if [Obama] is not pushed, he’s going to be a transactional president and not a transformational president.”

West took it a step further, as is his wont, adding that Dyson “and [MSNBC host] Brother [Al] Sharpton and [MSNBC host] Sister Melissa [Harris-Perry] and others…have sold their souls for a mess of Obama pottage…But at the moment, they want insider access, and they want to tell those kind of lies. They want to turn their back to poor and working people.”

Smiley is planning a January 17th symposium in Washington, D.C., three days before Obama’s second inauguration, to discuss poverty with participants such as Jonathan Kozol, Jeffrey Sachs, and Marian Wright Edelman. What he and West want is to get President Obama to convene a White House conference to eradicate poverty. West cited the statistics on poverty in the U.S. and particularly among people of color and attributed the growth of poverty in recent years to the “[s]hameful silence on behalf of leaders who do not want to tell the truth about the suffering of poor people.” Smiley added three additional factors: corporate greed, political indifference, and “a silencing and a sidelining of progressive voices over the last four years.” Both the Smiley convening and the hoped-for White House conference would aim to “craft a national plan to cut poverty in half in 10 years [and] to move toward eradicating it in 25 years.”

Too harsh and unrealistic about a president who is widely seen as politically progressive? Or are Smiley and West telling some necessary truths about a “Rockefeller Republican” Obama administration that needs a big push from advocates who know something about the suffering of the poor? If the latter, aren’t those advocates likely to be the nonprofits on the front lines of confronting the nation’s ever-growing poverty?—Rick Cohen