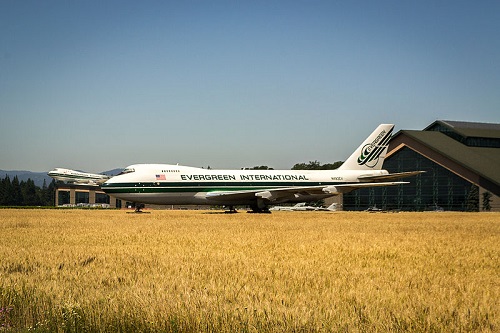 How closely entangled with a for-profit company can a nonprofit be before it is no longer a nonprofit? That’s the question raised by a report issued by the Oregon Attorney General’s Office. In the case of the Evergreen Aviation and Space Museum, it seems that the audit was connected to a whistleblower’s report that the museum had transferred $700,000 (discovered in the audit to actually have been $725,000) to the for-profit Evergreen International Aviation company, one of several Evergreen companies controlled by Delford Smith, who was the driving force behind the creation of the museum and its Wings and Waves waterpark.

Nonprofits typically don’t function as tax-exempt piggy banks for related private businesses, even if, as in this case, the business paid back the loan with interest. The fact that the for-profit side of Evergreen declared bankruptcy during the course of the AG’s audit makes the sizable loan even more significant.

AG Ellen Rosenblum’s audit asked whether the “significant interrelationships” between the museum and the Evergreen International companies jeopardized the museum’s and water park’s tax-exempt status. As the Oregonian notes, the bankruptcy declaration “effectively ends the question of whether the two sides are improperly commingling funds,” though with its Evergreen benefactor out of business, the museum is now in “a precarious place.”

How effectively integrated were the nonprofit museum and its for-profit company founders? The audit found three areas of concern:

The place is largely Smith’s. Although the museum owns a few exhibits, including Howard Hughes’s “Spruce Goose,” Evergreen owns the aviation museum, the theater, the waterpark, the chapel, the Boy Scout camp, and most of the land. The space museum and its land are owned by a charitable trust established by Smith.

Not surprisingly, the first executive director of the museum told the AG’s auditors that the museum “was treated and operated as if it was a division of Evergreen.” Evergreen executives always served on the board and exercised “substantial influence over Museum business, particularly because the board met infrequently, leaving Evergreen executives to participate in and direct its daily operations.”

Smith’s personal control was extensive, exemplified by this small but telling example: “At Mr. Smith’s insistence, an ice cream parlor was installed in the Museum facility for the benefit of his minor grandchildren and was done without any board review or approval. Mr. Smith refused to execute a lease for the space and Museum staff operated the ice cream parlor for two years, with all proceeds distributed to the family.” The AG’s report is full of examples of Smith’s or Evergreen’s unilateral decision-making on behalf of the museum, making a mockery of the notion that the museum was anything but an entity controlled by the family and Smith’s for-profit business.

Regarding the illegal transactions, the large loan is a key example—and a demonstration of the importance of nonprofit staff willing to stand up for nonprofit principles and ethics despite unrelenting pressure from other staff or people like Smith, who seemed to have fewer qualms about what they might have been asking for. In 2012, the Evergreen president had called the museum’s then-financial director, one Ms. Mery, to take Museum money to make an interest payment on behalf of Evergreen on a loan Evergreen owed. She was “skeptical,” according to the report, and “aware of Evergreen’s financial condition” at that time. The report then described the ensuing events.

“Ms. Mery refused to make the transfer. As a result, on October 3rd, Mr. Irwin and Ms. Berselli, both Evergreen executives and Museum board members, who also had signing authority on the Museum accounts, went to the bank themselves and wired $725,000 from the Museum’s account to Evergreen. After the transfer had been made, Ms. Mery was told to work with Evergreen counsel to work out the terms of a note for the funds. Although Mr. Irwin originally told Ms. Mery that repayment would be made in three days, Evergreen counsel informed her that the repayment term was 30 days and suggested the note have a 15-day repayment term…. Within the hour, Ms. Mery received a fully executed 30-day promissory note, signed by Mr. Irwin, on behalf of the Museum, and Ms. Berselli, on behalf of Evergreen.”

This is quite clearly an intertwining of the for-profit business interests of Evergreen with the nonprofit interests of the museum. The report cites as another example a $500,000 contract to purchase a DC-9 and a 747 cutaway from Evergreen as museum exhibits with no review by the museum board or staff as to whether those exhibits were needed or fit what the museum was supposed to be doing.

The report is fascinating reading, given the brazenness of Evergreen’s control of the nonprofit museum. However, with the significant presence and influence of corporate execs in the museum’s board and operations, one has to wonder how many other nonprofits established by or closely linked to corporations may, without the very questionable loan and contract transactions cited in the report, resemble the relationship of this museum with its corporate benefactors.