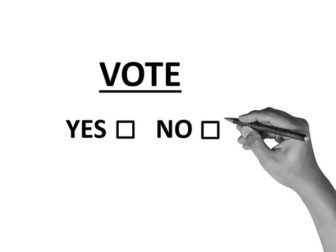 “Control of Virginia’s legislature hung in limbo Wednesday after a three-judge panel declined to certify the recount of a key House race, saying that a questionable ballot should be counted in favor of the Republican and tying a race that Democrats thought they had won by a single vote,” the Washington Post reports.

The judges had been expected to confirm the recount results and the Republicans had planned no challenges. But a Republican observer, Kenneth Mallory, had misgivings regarding accepting the throwing out of one ballot, which he detailed in a letter written late last night. This led to a formal challenge of one ballot.

The ballot shown below was originally disqualified in the recount because the voter marked two candidates. However, the judges, which the Post reports were all “elected by a Republican-controlled legislature,” decided that the following ballot was valid because the voter cast all other votes for Republican candidates and appeared to cross out the “over-vote” for the Democratic candidate. Allowing the ballot increased Republican incumbent David Yancey’s vote total to 11,608 votes, tying Shelly Simonds’ total of 11,608 exactly. “The court declares there is no winner in this election,” said Newport News Circuit Court Judge Bryant L. Sugg. 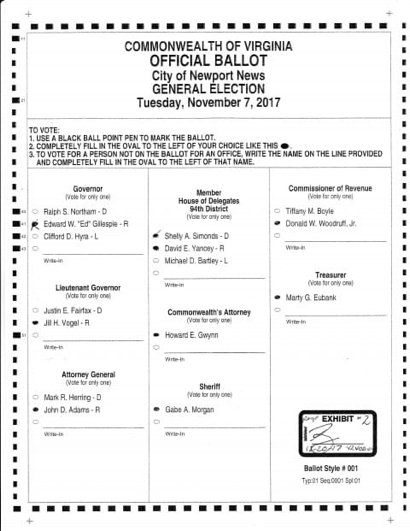 The Post reports that “the winner will likely be chosen by placing names on slips of papers into two film canisters and then drawing the canisters from a glass bowl (or his bowler hat).” A complicating factor is “the need to ensure that both a Democratic and Republican representative of the three-member elections board will be available during the holidays.”

But, the Post adds, it may not end with the coin toss. The Post notes that, under Virginia law, “If the loser of the coin toss is unhappy with that result, he or she can seek a second recount.”

Also, “It is not clear whether a final decision in the Simonds-Yancey matchup will settle control of the House of Delegates,” given that two other recounts, albeit with much less likelihood of changed outcomes (due to greater margins between the candidates) are still slated to occur.—Steve Dubb