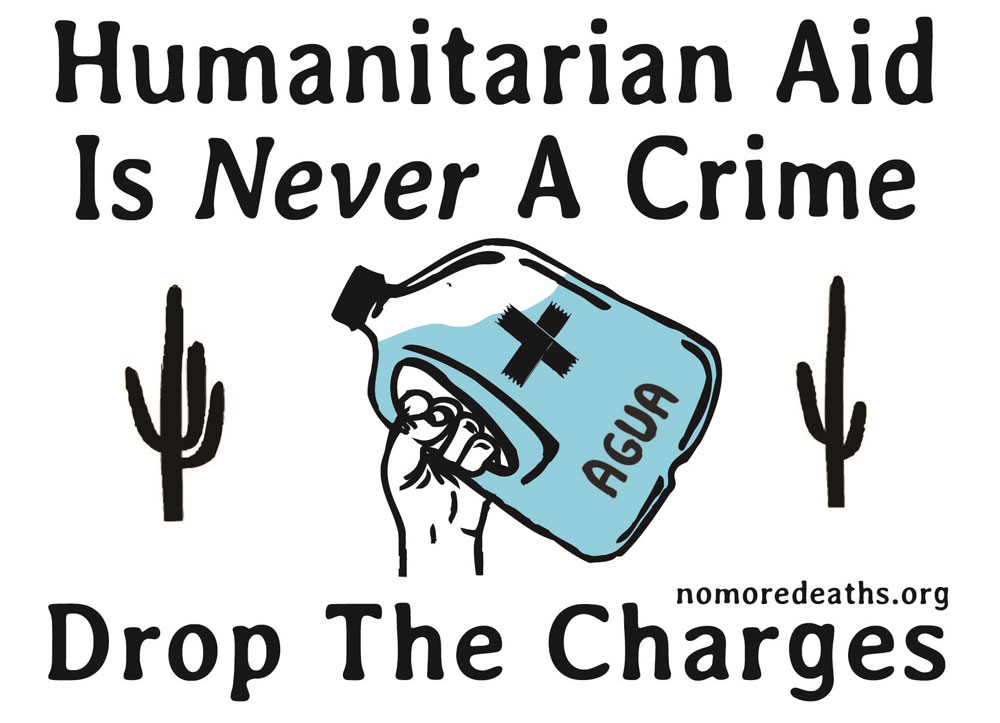 Arrested in January 2018 for illegally harboring and transporting undocumented immigrants, Scott Daniel Warren, a volunteer with No More Deaths (also known as No Más Muertes), stood trial on three felony counts in early June. He faced 20 years in prison for his efforts to provide food, water, and other essential items to migrants crossing the Sonoran Desert near Ajo, Arizona, an area of the border that is considered particularly dangerous. NPR reports about 250 migrants die in this area each year. Thousands more have died in other areas along the Arizona border.

But on Tuesday, the jury sitting on the case declared that they could not agree on a verdict, setting Warren free for now. The US Attorney has not yet said if he will seek another trial.

Warren’s arrest is part of a broader crackdown by the US Justice Department on volunteers who provide humanitarian aid to migrants. Not long after becoming the US Attorney General, Jeff Sessions ordered federal prosecutors to prioritize “any case involving unlawful transportation or harboring of aliens.” In the past, according to the New York Times, these laws were primarily used to arrest smugglers transporting migrants for profit; arrests started to rise in 2016, but spiked in 2018, following Sessions decision. According to NPR, since 2015, arrests for aiding migrants have increased more than 30 percent.

Warren’s case stems from an incident in January 2018, in which two migrants, Kristian Perez Villanueva from El Salvador and Jose Sacaria-Goday from Honduras, found their way to No More Deaths headquarters, known as “the Barn,” in Ajo. Not long after they were dropped off there, Warren arrived. The migrants requested food and water and a place to rest. Following the group’s protocol, Warren screened them for health issues and provided them with food and water.

The US Border Patrol was conducting surveillance on the Barn at the time and saw Warren talking to the men and pointing into the distance. The agents then approached the building, and arrested all three men, claiming Warren was instructing the men on how to avoid check points when they moved on.

The government argued in court that Warren was attempting to shield the migrants from federal law enforcement agents, but with no evidence other than their observation of Warren pointing into the distance, they were likely unable to prove “intent,” according to Niels W. Frenzen, director of the immigration clinic at the University of Southern California Gould School of Law. He told the Washington Post it is likely that at least one juror did not believe the prosecution had proved that Warren was “trying affirmatively to prevent officials from detecting the migrants.”

Gregory Kuykendall, Warren’s attorney, argued that “Scott Warren is a law-abiding, life-giving good Samaritan.” He noted outside the courtroom, “Threatening humanitarians with felonies and prison time for helping migrants survive in the desert is part of the Trump strategy to deter immigration. This case is a test of that.”

Warren, in a statement following the trial, said, “In the time since I was arrested in January 2018, no fewer than 88 bodies were recovered from the Arizona desert. The government’s plan in the midst of this humanitarian crisis? Policies to target undocumented people, refugees and their families. Prosecutions to criminalize humanitarian aid, kindness and solidarity.”

A coalition of community and faith groups concerned about desert crossings formed No More Deaths in 2004. In 2008, the group became an official ministry of the Unitarian Universalist Church of Tucson. The group has expanded their mission from leaving food, water and clothing along migratory paths through the desert to documenting the “abuse, neglect, and mistreatment endured by detainees” who are detained by the US Border patrol or housed in immigration detention centers.

Warren’s case has attracted worldwide attention. Dozens of vigils were held in the US in support of Warren’s actions, protests were held outside the courthouse, and 125,000 people signed an online petition asking for the case to be dismissed. In addition, the United Nations High Commissioner for Human Rights weighed in, saying in a statement, “Humanitarian aid is not a crime.”

In addition to Warren, several other No More Deaths’ volunteers have been arrested and charged with misdemeanors, for which they have faced fines up to $10,000.

NPR also cites two other cases that are of concern to advocates and activists trying to stem the carnage of current immigration policies. Teresa Todd, a city and county attorney for the west Texas town of Marfa, was arrested in February, after she offered a young man and his sister shelter in her vehicle while she attempted to figure out what she could do for them. Esmerelda was 18 years old, dazed, and barely able to walk, says Todd. While Todd called a friend who was legal counsel to the local US Border Patrol, a sheriff’s deputy arrived and called the border patrol. Todd was taken into custody, along with the migrants. She is still awaiting an indictment.

Todd, according to NPR, is “unrepentant”: “I feel like I did the right thing. I don’t feel I did anything wrong.” NPR also tracked down Esmerelda in a detention facility. She said of Todd, “I’m really grateful to her.” She told NPR that doctors had told her she was on the brink of death by the time she got to the hospital.

In a third case, Ana Adlerstein, a US citizen and volunteer at a Mexican migrant center, accompanied a migrant to a US border crossing at Lukeville, Arizona, to request asylum. Despite providing advanced notice, Adlerstein was detained and is now being investigated by the Department of Homeland Security. Though she hasn’t been charged yet, she says, “I was accused of human smuggling.” She says her actions were clearly intended to comply with laws governing asylum requests. She said, “If that’s not how you’re supposed to seek asylum at a port of entry, how are you supposed to seek asylum in this country?

The answer from the current administration is, clearly, you are not. “Our country is full,” the president said in April.

You are also not supposed to exercise your faith or your conscience—to help people in need.

“With these prosecutions, the government is saying, ‘we are extending our zero-tolerance policy to Good Samaritans,’” Ranjana Natarajan, director of the civil rights clinic at the University of Texas School of Law, told NPR reporter Lorne Matalon. “People shouldn’t be helping migrants even if they might be at threat of death.”—Karen Kahn