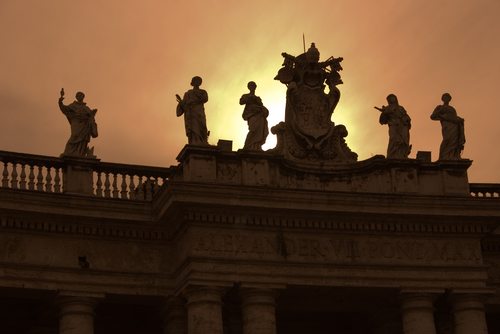 Reporting for Remapping Debate, Kevin C. Brown paints a pretty devastating picture of what he characterizes as the “two-tier morality” of the U.S. Conference of Catholic Bishops (USCCB). One tier, he writes, is the anti-poverty advocacy that the Catholic Bishops are known for—for example, calling on New York’s legislature to increase the state’s minimum wage and condemning the U.S. House Budget Committee’s proposed cuts in food stamps and Medicaid.

That’s the tier that the public thinks it knows about the bishops’ social politics, but Brown contends that “the strength of the USCCB’s anti-poverty advocacy does not, in general, match the rhetoric.” He cites a fellow at the Woodstock Theological Center at Georgetown University, the Rev. Thomas Reese, who contends that “there is not real muscle” behind the bishops’ public anti-poverty agenda. According to David Hollenbach, a Jesuit theologian at Boston College, “The status of abortion and homosexuality and stem cell research issues and so forth [have been elevated] to a level of discussion…in a way that…is inappropriately stressing those issues above the broad range of issues that really need to be dealt with,” including, says Brown, poverty.

While many people credit the Catholic Church with extensive charitable support of poor people, Brown quotes Fred Rotondaro, chair of the board of directors of Catholics in Alliance for the Common Good, who asserts that Catholic charities such as the Campaign for Human Development “alleviate the suffering…(but) have failed to…attack the causes of poverty in America.”

Brown compares the advocacy of the USCCB on federal poverty and social safety net issues, delivered through the Domestic Social Development Office with a staff of five, to the Pro-Life Activities office, with eight staff people. Brown also notes the Bishops’ torrid written condemnation of the Ryan budget in Congress, but Brown says that effort was undercut by Cardinal Timothy Dolan, head of the USCCB, after Rep. Paul Ryan (R-Wis.) responded forcefully; Brown characterized Dolan’s response to Ryan’s defense as “conciliatory” in comparison to the more forceful bishops’ letters.

He concludes with a quote that he seems to agree with from Steve Krueger, the national director of Catholic Democrats, who says that the bishops “spoke out much more vigorously, much more unambiguously…25 and 15 years ago than they are today” on anti-poverty issues.

Do you think that the Catholic bishops engage poverty issues from two different tiers, one that seems to be strongly committed to promoting policy changes to benefit the poor, and another which either offers charity rather than social change advocacy or diminishes support for anti-poverty efforts because of the bishops’ elevation of their pro-life, anti-abortion, anti-stem cell agenda? –Rick Cohen