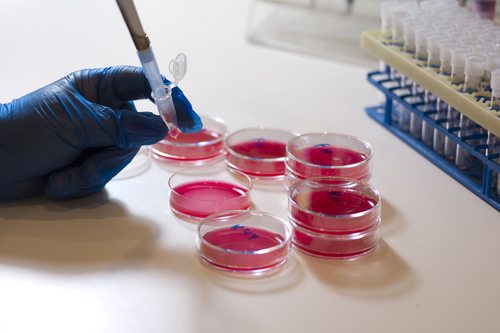 It’s more than likely that the readers of the NPQ Newswire may not be all that heavily involved in scientific research, but for those who are, the impact of federal budget cuts on agencies such as the National Institutes of Health and other federal agencies supporting scientific research have been devastating. For example, in fiscal 2013, the NIH had its budget cut (per sequestration) by 5 percent, roughly $1.5 billion, which meant that 640 research grants were not issued. As this Mediaite table shows, the NIH may be the largest funder of biomedical research in the world, but its appropriations have plummeted from over $31 billion in 2010 to a projected $27 billion in 2014: 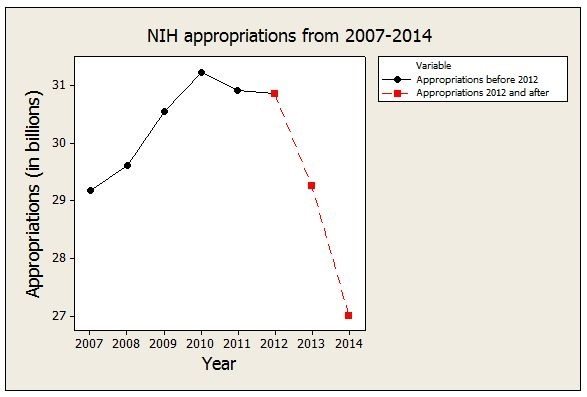 While the Senate’s proposed 2014 budget would have replaced the sequester with an increase in NIH’s budget back up to close to $31 billion, Congress is still in a pitched battle with the White House over the budget, with little indication that there has been much movement to reverse this past year’s and the coming year’s sequestration cuts.

What is a scientist to do, given these cuts? Writing for ASBMB Today, the magazine of the American Society for Biochemistry and Molecular Biology, University of Alabama at Birmingham cancer biology Ph.D candidate Mark Stewart looks at crowdfunding as one of the ways scientists are trying to finance their research in this less than supportive federal budget climate. What is interesting in his article are his citations of researchers who took to crowdfunding for their quite esoteric projects.

For example, Stewart writes about Michael Pirrung, a professor of chemistry at the University of California-Riverside, who was faced with finding new sources of money or having to lay off some of his staff. Facing deep cuts in NIH funding to support his drug research and testing regarding a treatment for kidney cancer, he turned to crowdfunding. Stewart reports that “Pirrung says he ‘initially thought the website would bring thousands of eyes’ to his project and that ‘everyone would donate a dollar or $5.’ This proved not to be the case.” Given the limited amount of funding that can typically be generated through a crowdfunding solicitation—Stewart suggests between $1,000 and $20,000—crowdfunding doesn’t replace big NIH grants, and Pirrung called it “a lot of work for not a lot of money.” To get his project wider attention, Pirrung actually recruited an “influential science blogger” to write about his research and generate more attention.

In another example, Elizabeth Iorns, the co-founder and chief executive officer of Science Exchange, turned to crowdfunding for research on a project to prevent the transmission of a gene that could increase the likelihood of cancer. Unlike Pirrung, she wasn’t in an academic setting, having started her own company, and was unlikely to be able to get funding through the kind of traditional grant application that university funders use with federal funding sources such as NIH. So, she resorted to crowdfunding, too. Rather than turning to a blogger, Iorns used social media to generate attention for her project. Like Pirrung, Iorns says, “It is a lot of work.”

Both Iorns and Pirrung found success for their projects, but not along the lines of big money replacing large federal grant sources. Iorns chose this funding mechanism because she had left academia to start her company and thought she had little chance of obtaining funding through a traditional grant application. But professors at universities also use this type of funding. During Pirrung’s search for funding to synthesize a kidney-cancer drug, he used crowdfunding to start the project. Without crowdfunding, it is likely both projects would not have been initiated.

On one hand, there are some positive benefits to crowdfunding strategies, such as publicizing the project and the sponsoring institution, expanding the public’s knowledge of scientific research, and offering opportunities for undergraduate and doctoral students to start projects that wouldn’t typically get major funding from other sources. On the other hand, because crowdfunding sites aren’t really able to conduct scientific reviews of the quality and substance of the “scientific” projects they advertise, there are potential problems with the legitimacy of some crowdfunding projects and the potential risk of public trust if they go bad or prove bogus.

Larry Lawaal, the founder and CEO of HealthFundIt, suggests that the scientific community has the ability to “self-police the projects presented on the [crowdfunding] sites,” but our review of many crowdfunding sites suggests that there have been problems in some cases. There are also problems with how the crowdfunding money reaches the projects—directly to the institutions or to the projects, with or without a proportion for indirect costs, etc. These issues often have to be worked out on a case-by-case basis within the policies of the scientists’ sponsoring institutions.

In the end, Pirrung’s “kidney-cancer drug was successfully synthesized and sent to the NCI for comprehensive tests” and “he secured more funding to continue his work on developing anticancer drugs and avoid laying off lab members.” The crowdfunding money, Pirrung says, served as a “bridge” until other money could be raised. That’s a good story for Pirrung, but crowdfunding is a stopgap measure that doesn’t turn the tide of continuing devastating cuts in this nation’s waning commitment to federally funded scientific research.—Rick Cohen