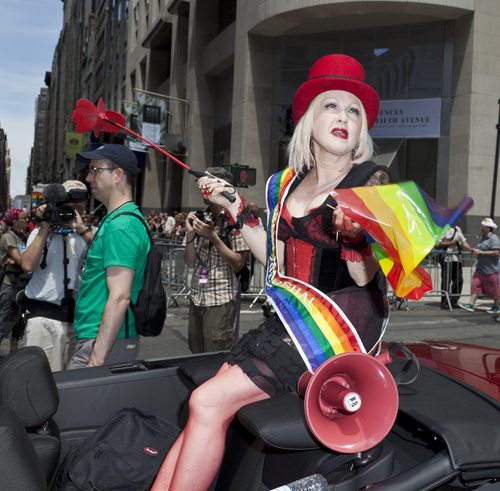 Cyndi Lauper, the pop music icon and co-founder of the True Colors Fund, prepares a second annual “Home for the Holidays” benefit concert featuring an impressive list of celebrities. The True Colors Fund advocates for LGBT equality and focuses on ending gay, lesbian, bisexual and transgender youth homelessness. Carson Kressley will host the event on December 8th, and the concert will include appearances by celebrities such as Sarah McLachlan, Whoopi Goldberg, Rosie O’Donnell, Adam Lambert, Terri Nunn, Rita Coolidge and Roberta Flack (with more to be announced).

Proceeds will go to the True Colors Fund’s Forty to None Project, which works towards decreasing the 40 percent of homeless youth that are gay or transgender. A report released in July by the Palette Fund, the True Colors Fund, and the Williams Institute determined that 94 percent of homeless service providers reported assisting LGBT youth and 40 percent of those served identified themselves as part of the LGBT population. Lauper stated, “For far too long homeless youth have not received the attention, resources and funding necessary to bring an end to this epidemic. My hope is that through this inspiring evening of music and comedy we can raise awareness and much needed funds to help these young people through our newly launched Forty to None Project.”

In a blog post on the Forty to None Project website, Lauper explains that she was inspired to create the charity five years ago at a photo shoot on the Christopher Street Pier in New York City when she met and interacted with homeless LGBT youth and realized those “who make up the 40% have done nothing wrong, other than being born the way they were supposed to be. And because of who they are, these kids have been forced to leave their homes, subjected to abuse or worse.” Last year’s Home for the Holidays benefit show sold out and drew in more than 2,800 attendees. –Aine Creedon