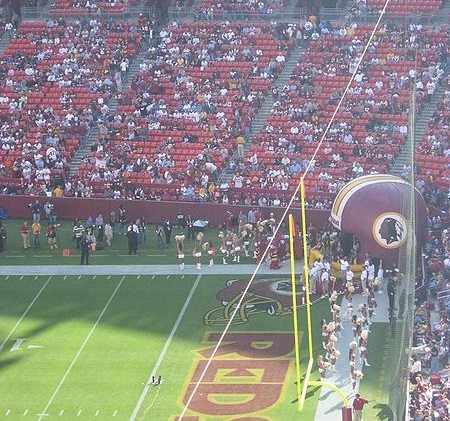 You have to give it to Dan Snyder for dogged chutzpah. He won’t go down—or shed the racially disparaging name of his Washington, D.C. National Football League franchise—without pulling out all of the stops.

According to Erik Brady writing for USA Today, the Original Americans Foundation, Snyder’s new charity to support Native American causes and communities, has approached the Zuni Pueblo tribe in Zuni, New Mexico to purchase artwork such as jewelry, pottery, and etchings—preferably embedded with the colors (burgundy and gold) and logo of Snyder’s team. The logo, for those readers who might not be fans of the team, is the profile of a Native American face, austere and unsmiling (unlike the silly smiling Chief Wahoo of the Cleveland Indians), within a yellow circle with two attached feathers.

A letter to Zuni artists, apparently from the Zuni Pueblo tribe, invited artists to the Zuni Tribal Conference Room to present their artwork to representatives of the foundation and, one would guess, the team. The letter added an unusual postscript: “Be respectful when you arrive. Do not smell of alcohol, marijuana, or be under the influence.” 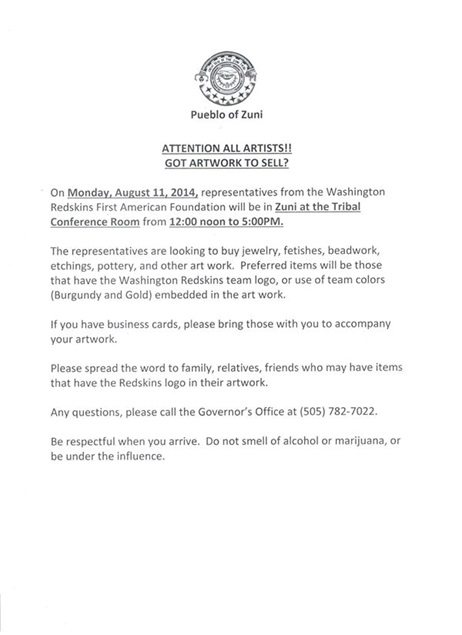 As Dan Snyder himself found when he visited, the Zuni Pueblo tribe faces serious economic problems, including an unemployment rate of some 67 percent. Tribal administrator Hanna Weeke told USA Today Sports, “We have a very depressed economy and the (tribal) governor wanted to help local Zuni artists,” and she expects that Snyder’s foundation will pay artists full costs rather than the cut rates most people expect on Native American artwork.

That is the strategy of Snyder’s new foundation: Go to desperate poor Native American communities, offer foundation support of some sort or another that the communities are hard-pressed to reject given their needs, and connect it to the use and promotion of the Washington team’s racially disparaging name.

Some of this sounds less like charity and philanthropy and more like the history of a part of the Christian missionary outreach (actively supported by the federal government) to Native Americans in the 1800s. In return for assistance from whites, Native Americans were encouraged and expected to adopt white ways and to be assimilated into white culture. Now, through the philanthropy of Snyder’s NFL team, Native Americans are encouraged to assimilate a racially disparaging team name. That’s the chutzpah of Dan Snyder’s missionary approach to philanthropy, except that he isn’t offering food and assistance in exchange for white culture and religion. He simply wants Native Americans to take the charitable money in return, at a minimum, for turning a blind eye to the racially disparaging team name.

Let’s see what the National Football League says about this, if anything. Brady notes, “Left unsaid: The NFL often asks unlicensed artists and craftsmen who use NFL logos to cease and desist.”—Rick Cohen