Data? It Depends! Counting Homeless People Depends Upon Your Definition 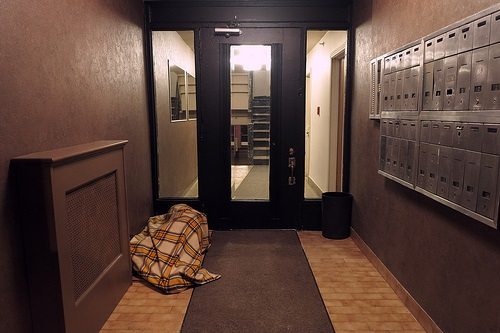 The Great Recession led to an explosion in the number of people experiencing homelessness. Many turned to relatives and friends before turning to shelters or the streets. The U.S. Department of Housing and Urban Development (HUD) is responsible for defining and tracking the number of homeless people. It currently does not define people “couch surfing” or living in motels as among the homeless. New legislation proposes to expand the definition of homelessness, but without increasing resources to support a system that’s over capacity and drastically underfunded, the bill fails to address the underlying problem.

Katie Jeffery’s 17th birthday present from her mom was the streets. Katie’s mother kicked her out of the house; the youth traveled from friends’ couches to cars, motels, and even a shed for the next four months as she battled to graduate from high school. Because she was never forced to live on the streets, HUD never counted her as homeless.

The nation’s public schools identified over 1.2 million students as homeless last year. Eighty percent are not defined as homeless by HUD and therefore are ineligible for essential services. States with smaller populations, like Wyoming, where Katie was living, are seeing some of the biggest increases; unfortunately, they also have the fewest resources. More than half of HUD-funded emergency shelters are located in major cities.

Last week, bipartisan legislation was introduced in Congress to expand the definition of homelessness. The Homeless Children and Youth Act of 2015 was introduced in the House by Representatives Steve Stivers (R-OH) and Dave Loebsack (D-IA). Senators Dianne Feinstein (D-CA) and Rob Portman (R-OH) introduced it in the Senate. If passed, it would identify homeless families and youth without regard to where they are staying. It would also give localities more power over how to spread their limited and grossly inadequate federal resources dedicated to these critical services.

The National Alliance to End Homelessness agrees that HUD’s definition of homelessness is out of date. But currently, only 14 percent of the approximately 380,000 unaccompanied youth under the age of 18 who “experience a runaway or homeless episode lasting more than one week” every year are served. For the nation’s system of shelters and other nonprofit service organizations to have the capacity to serve all of these youth, resources would need to be expanded by a factor of seven.

According to the Alliance, the Homeless Children and Youth Act of 2015 would add an additional 7 million people eligible for services. Without additional funds, the organization is concerned that scarce resources will be shifted away from people living on the streets to those that have someplace to stay, however insecure.

One can only hope that a more accurate number would further strengthen the argument for additional resources. But given that slightly more than one in ten homeless people are currently being served, one wonders how much larger the inadequacy would need to be for our nation to allocate the resources needed to fund these crucial programs.—Gayle Nelson