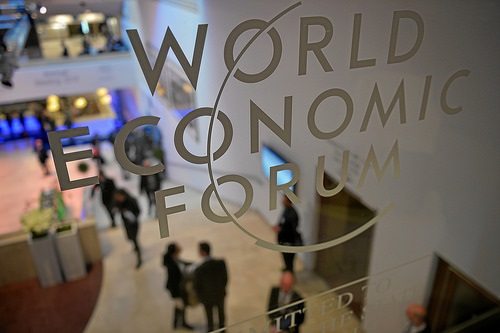 You weren’t in Davos this past week? Aren’t you one of the world’s movers and shakers, invited to the Swiss ski resort to ponder the world’s biggest problems? You didn’t get an invitation-only offer for a ticket to the event that would set you back $20,000 (though apparently some guests pay as much as $71,000 to attend)? Why not?

These heavy hitters, including 40 heads of state, are getting top-flight security treatment. Approximately 5,000 Swiss soldiers, roughly two for every Davos participant, will be guarding the retreat behind 26 miles of fencing and under a no-fly zone.

You can tell the importance of the gathering: There were, amazingly, 1,700 private jets expected to head to Davos for the World Economic Forum, which commentators suggested was in contradiction with the gathering’s fervent discussions of climate change. The contrasts go beyond climate change, as the elite of the elite of the world gather at a luxury ski resort to discuss solutions to global poverty. Also sadly funny was the revelation of former hedge fund director Robert Johnson at Davos that hedge fund managers were planning escapes to remote islands in case the civil unrest reflected by the Ferguson and Occupy protests escalated. “I know hedge fund managers all over the world who are buying airstrips and farms in places like New Zealand because they think they need a getaway,” Johnson said. To his credit, Johnson is no apologist for hedge fund managers, but the head of the Institute of New Economic Thinking, a research institute co-founded by George Soros, who gave it a start-up grant of $50 million.

Nevertheless, why would big corporate executives from the likes of Goldman Sachs, Banco Santander, Mitsubishi, and Deutsche Bank show up at Davos to discuss issues of poverty—and likely get hammered by the more progressive nonprofit advocates invited to attend, such as Jim Wallis of Sojourners, Winnie Byanyima of Oxfam (one of the six co-chairs of the Forum who released a report documenting that the world’s richest one percent will own more than half of the world’s wealth by 2016), and Ken Roth of Human Rights Watch (who went off on a couple of the assembled heads of state, for example, tweeting, “Sisi presides over most ruthless crackdown in Egyptians’ memory but is given podium at Davos” and telling Foreign Policy about the “fawning” at Davos over China but the avoidance of discussion of China’s abysmal human rights record)?

Bloomberg News offered this description of the Davos dynamic with corporate bosses: “Get a bunch of them from different industries and parts of the world together to talk about their common concerns, though, and the result is almost inevitably fatuous.” Fatuous or not, the World Economic Forum is a show for business CEOs, an opportunity for uttering what they think are profound words with the likes of Ban-Ki Moon and appearing thoughtful and concerned about the vast masses of the world who won’t earn in triple lifetimes what they take home in a week. It is corporate leadership as statesmanship—again, as put by Bloomberg News, “conversation…[that] tends to be a mix of the occasional profound insight, a lot of home truths, a lot of buzz words and a generous helping of nonsense.” In addition, however, it is an opportunity for corporate executives to meet privately and cut deals, whether simply understandings of “you do this and I’ll do that” or more explicit business transactions.

There is something more fundamental in the mix for corporate executives than to hobnob with national leaders and big thinkers. The fact that they are there, welcomed, and lauded is essentially a recognition, from the U.S. to China to the representatives of the Russian Federation, that the assembled in Davos believe in the role of business in addressing world problems—and will ask business for a helping hand. Rather than lambasting corporate excesses and calling for increased corporate accountability, many of the assembled gave gold stars to their corporate partners and called for international business to do more.

For example, Neal Keny-Guyer, the CEO of Mercy Corps, extolled the NGO’s close working relationship with MasterCard and suggested that companies that were tentative to invest in fragile economies could look to “international non-governmental organizations…[as] valuable partners.” Ertharin Cousin, the executive director of the UN World Food Programme, called for “greater corporate investment in life-saving programmes and innovative solutions to meeting the goal of eradicating hunger and poverty around the world,” which she said are “fundamental to boost business success,” while business leaders such as UBS Switzerland chairman Axel A. Weber, GE vice-chairman John Rice, and Carlyle Group co-founder David Rubenstein said that the necessary counterpart was investment in infrastructure plus policy changes in areas such as pension reform and labor markets. Antonio Guterres, the UN High Commissioner for Refugees, wrote in a Davos blog about the necessity of business involvement in helping fix the broken humanitarian aid system for refugees, where “the private sector steps up and becomes not just a bit player, but a driving force in fixing the global emergency that is upon us.” UPS CEO David Abney weighed in that the solution to ending poverty will come partly through trade reform and called for the enactment of the Trade in Services Agreement, the Transatlantic Trade and Investment Partnership (TTIP), the Trans-Pacific Partnership (TPA), and the Trade Facilitation Agreement (TFA), an agenda that some liberal and labor advocates find troubling.

In Davos, however, the world’s top corporations don’t face the eviscerating criticism that so many deserve. Perhaps it is only in Davos that JPMorgan’s Jamie Dimon would continue to get plaudits as “America’s favorite banker” and hagiographic biographical sketches that include lines such as, “America’s most charismatic CEO…[with] the mercurial ability to comment on and heavily influence banking policy by rubbing shoulders with a plethora of stakeholders from US presidents, central bankers to lawmakers as well as his peers in the US banking system,” even as he is acknowledged as being a primary spokesperson in the gathering for the “too big to fail” dynamic. These corporate moguls don’t show up in Davos to get publicly reviled or to face Occupy protests. At Davos, they are feted.

Outside of the World Economic Forum, the corporate adulation is less.  For example, at one event, the Berne Declaration and Greenpeace Switzerland awarded Chevron its “‘Lifetime Award’ for being the most irresponsible corporation.” Then, at a counter-event at the closing, the satirical group The Yes Men, dressed as undertakers, performed “Requiem for the WEF,” with the wonderful line, “Corporate Social Responsibility is like putting a bandage on a severed head—it doesn’t help.” It’s doubtful that the Yes Men will be invited to join next year’s Davos program.

A good time was probably had by all, but for the corporate CEOs in Davos, it was probably better, as they found themselves honored and feted rather than reviled and blamed.—Rick Cohen