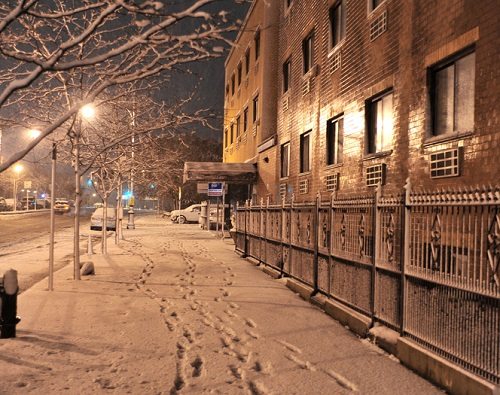 What does a new mayor do to improve the lot of the homeless when homelessness is a national, societal challenge, not limited to any particular city—even one with the population of a medium-sized country, like New York? Mayor Bill de Blasio inherited the challenge of providing for tens of thousands of homeless persons. The most recent report from the City’s Division of Homeless Services counts 52,171 individuals in the city’s homeless shelters as of February 20th. That number is about 70 percent higher than the homeless population in shelters when Mayor Michael Bloomberg took office in 2002, according to the Coalition for the Homeless.

De Blasio’s latest move, announced Friday, was to take 400 children out of the Auburn Family and Catherine Street shelters due to their unsafe and unhealthy conditions. But there are 22,478 homeless children, members of 10,731 homeless families, in city shelters. Keeping families in shelters—keeping anyone in shelters, actually, as opposed to supportive housing—is an ultimately losing strategy. The one program that was helping some homeless escape the shelter system, a temporary rental subsidy program called Work Advantage, had its funding cut by Governor Andrew Cuomo and was later eliminated altogether by Mayor Bloomberg, leading to a huge spike in the number of people entering the shelter system.

One step for the new administration might be to work with the governor to design a new program of rental housing subsidies to get the homeless into real housing. (Apparently, the two sides are talking.) Another would be for Mayor de Blasio to fulfill a campaign pledge to give priority status for homeless shelter residents applying for Section 8 housing or public housing. So far, he hasn’t done that, suggesting that the provision of housing doesn’t get at the “root causes” of the homelessness of tens of thousands and, not surprisingly, that there are already huge waiting lists for Section 8 and public housing.

De Blasio may be underestimating the importance of housing as a platform for homeless families to address the “root causes” of their situations, but at least he is unlikely to dredge up this canard used by Bloomberg to justify ending the rental subsidy program: “You never know what motivates people,” Bloomberg said on a radio show in 2011. “One theory is that some people have been coming into the homeless system, the shelter system, in order to qualify for a program that helps you move out of the homeless system.” It wasn’t just Bloomberg’s idea. His homelessness commissioner, Seth Diamond, said much the same.

Bloomberg might not have understood that the actual number of homeless families is undoubtedly much larger than the official count in shelters. People don’t choose to become homeless, choose to move into a shelter, and choose to wait until they’re eligible in order to win the prize of a very-short-term rental subsidy. As the former regional director of the Department of Housing and Urban Development for New York and New Jersey, de Blasio knows the score better than almost any other big city major. To oversee the Department of Homeless Services and a variety of other agencies, Mayor de Blasio appointed as deputy-mayor Lilliam Barrios-Paoli, who was described by Mary Brosnahan, president and CEO of the Coalition for the Homeless, as “perhaps the best regarded and most seasoned leader in the social services arena…smart, dedicated and tireless—exactly the combination New York needs to reverse record homelessness and restore hope to our most vulnerable neighbors”.

At a minimum, with de Blasio as mayor and Barrios-Paoli as deputy mayor, the right team is in place to do what is necessary to address the needs of homeless families and individuals in New York City. What they do in New York will resonate around the nation as a model for municipal responses to the tragedy of homelessness in the U.S.—Rick Cohen