Defense of Marriage Act Struck down by Federal Appeals Court 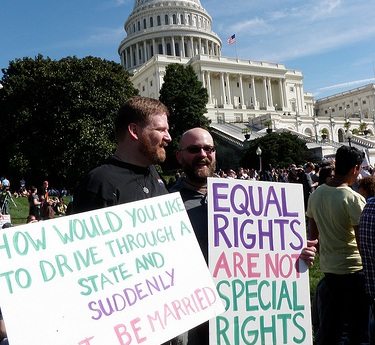 In a decision that is both historic and likely to be the subject of a Supreme Court case, the 1st U.S. Circuit Court of Appeals in Boston yesterday ruled that the federal Defense of Marriage Act (DOMA) violates the constitutional rights of gay and lesbian couples. The court’s unanimous decision came from a three-judge panel made up of two Republican judges and one Democratic judge. Here is an excerpt of the ruling:

“For 150 years, [the] desire to maintain tradition would alone have been justification enough for almost any statute…But Supreme Court decisions in the last fifty years call for closer scrutiny of government action touching upon minority group interests and of federal action in areas of traditional state concern. To conclude, many Americans believe that marriage is the union of a man and a woman, and most Americans live in states where that is the law today. One virtue of federalism is that it permits this diversity of governance based on local choice, but this applies as well to the states that have chosen to legalize same-sex marriage. Under current Supreme Court authority, Congress’ denial of federal benefits to same-sex couples lawfully married in Massachusetts has not been adequately supported by any permissible federal interest.”

The law in question, DOMA, defines marriage in a way that intentionally excludes gay and lesbian couples from some 1,100 federal benefits such as the ability to file joint tax returns or to collect the Social Security benefits of one’s deceased partner. Congress passed the law with the intention of shoring up the tradition of heterosexual marriage, but one of the court’s members, Judge Boudin, wrote that those who have defended DOMA have not adequately explained “how denying benefits to same-sex couples will reinforce heterosexual marriage.”

Among those who see equality for America’s gay and lesbian citizens as a leading civil rights issue of the day, the court’s decision was cheered as just. Plaintiff Jonathan Knight said the decision is an endorsement of “not having a system of first- and second-class marriages.” Knight noted that, even though his home state of Massachusetts recognizes his marriage, the fact that the federal government does not costs him and his husband an extra $1,000 each year since they can’t file a joint federal tax return.

Meanwhile, among those who see gay marriage as a threat to heterosexual marriage, the court’s decision came across as an overreach. Kris Mineau, the president of the Massachusetts Family Institute said the “ruling that a state can mandate to the federal government the definition of marriage for the sake of receiving benefits” was “really bizarre” and “rather arrogant.”

Many analysts predict that the case will now head to the Supreme Court. In fact, the appeals court ruling itself noted that, “only the Supreme Court can finally decide this unique case.” In the meantime, as President Obama announced last year, the U.S. Justice Department will no longer defend the constitutionality of DOMA. –Mike Keefe-Feldman