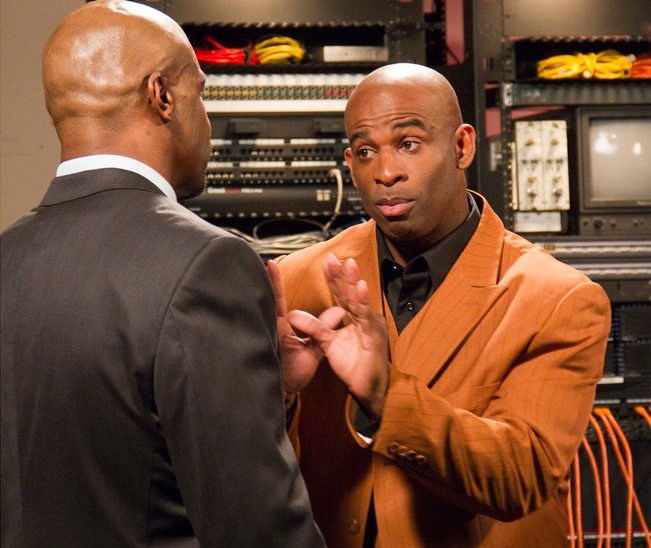 During his NFL Hall of Fame career playing days, his nickname was “Prime Time.” Today, now retired from the NFL, Deion Sanders is a television sports commentator and, for the interest of NPQ Newswire readers, a warrior of sorts in the war on poverty. It isn’t the War on Poverty that emerged during the administration of President Lyndon Johnson, but a new version based in the anti-poverty strategies articulated and supported by House Budget Committee chairman Rep. Paul Ryan (R-WI), which owe a great deal to the mentorship of Bob Woodson, founder of the Center for Neighborhood Enterprise.

Woodson’s Center hosted a program in July on anti-poverty work, capturing both Ryan and Sanders on a panel to discuss their anti-poverty ideas. To his credit, Woodson’s approach to anti-poverty work “runs to the people everyone else wants to run away from,” as he puts it, which means turning to the likes of former gang members like Omar Jahwar, who works with Sanders in Dallas (where Sanders played for most of his NFL career) recruiting gang members to help fight violence in 17 public schools. Why “to his credit”? We have always admired Woodson, even if we part company with him on some national policy issues, because he isn’t a talker about solutions, but a doer—and willing to challenge others who lean conservative to do more than talk about the application of conservative political solutions to issues of race and poverty.

At the Center’s program, Woodson was joined by former New Jersey Secretary of State Buster Soaries, who denounced the “poverty industry” that he, Woodson, and others believe keeps people in poverty—and to some extent needs to keep people in poverty—in order to justify its existence and access to government program funds.

Sanders lauded Ryan for being “genuine and authentic” about poverty. “Often times the people that are making these crazy decisions have never set foot in the inner-city unless its for a photo op, and that’s what I have a problem with,” Sanders said. “We are really trying to provoke change, and we will provoke change…but if we could have more help and assistance, we could do it expeditiously.”

Waxing enthusiastic about Ryan, Sanders added, “There’s a lot of people trick-or-treating in these wonderful offices, and it’s not even October…But the man that I’m sitting by, I’m telling you he’s real. […] I would not waste my time…I’ve got a wonderful life, and I have means. So I would not waste my time to come here had I thought and had I known that he’s trick-or-treating. It’s real. It’s authentic.”

In language that nonprofits understand very well, Ryan explained his anti-poverty thinking. “If you want to do better on restoring upward mobility and combating poverty, you have to do what works,” Ryan said. “When you get out of [D.C.] and get around real America, you can find things that work.”

The mythology that unfortunately gets embedded in this kind of program amidst the interplay of Ryan, Woodson, Soaries, and Sanders is, as the Free Beacon’s Brent Scher put it, that the federal government “prefers to measure its success by the amount of money it has doled out to the poor rather than the number of people it has brought out of poverty.” Scher quoted Ryan as saying, “The federal government can provide resources—and its good at that—but it can’t displace the human interactions, the personal touch that occurs when you do this at the grassroots level.” However, Scher then suggests that “it was a consensus among the poverty fighters featured on the panel that human touch is the key to generating change in people—and that it is something a bureaucratic social worker can’t offer.”

Discussing legislation he and Senator Patty Murray (D-WA) have introduced to establish a commission to chart a path toward improved evaluation of public policies based on robust outcome measures, Ryan added, “It’s the mindset on what the public thinks is the war on poverty that we’re trying to attack. It has mistakenly reinforced this notion that: ‘Oh, this is government’s responsibility, I don’t have to do anything about this. I pay my taxes. I do my job. I send my money to Washington. They’ll fix this. And what we’ve done as a result of that, is we have isolated and marginalized the poor from among us…What these leaders are showing is—no, no, no, it’s the opposite of that. Everybody has a stake, and everybody can do something.”

Many anti-poverty warriors see things quite differently than Ryan, Sanders, and Scher. Government doesn’t measure its impact on poverty simply by increasing expenditures, the characterization of poverty “bureaucrats” is demeaning to people who are dedicated for the most part to help people in need, and the people who have generated alternatives to Ryan’s anti-poverty plan are, contrary to Sanders, not ingénues who have never set foot in poor communities. That isn’t to disparage Woodson, Ryan, or even Sanders, who has his own organization in Dallas called Truth Sports, ostensibly established in 2008, though we couldn’t find a Form 990 on GuideStar for the organization. To his great credit, Woodson has pushed conservatives like Ryan to think about and talk about poverty in an era where most public figures steer far clear of the topic. Nonetheless, it seems like Sanders and his companions need to be disabused of mythology of the purportedly pernicious effects of “government” and “bureaucrats.”—Rick Cohen