Denmark Determined to Brand Itself as Country Least Attractive to Refugees 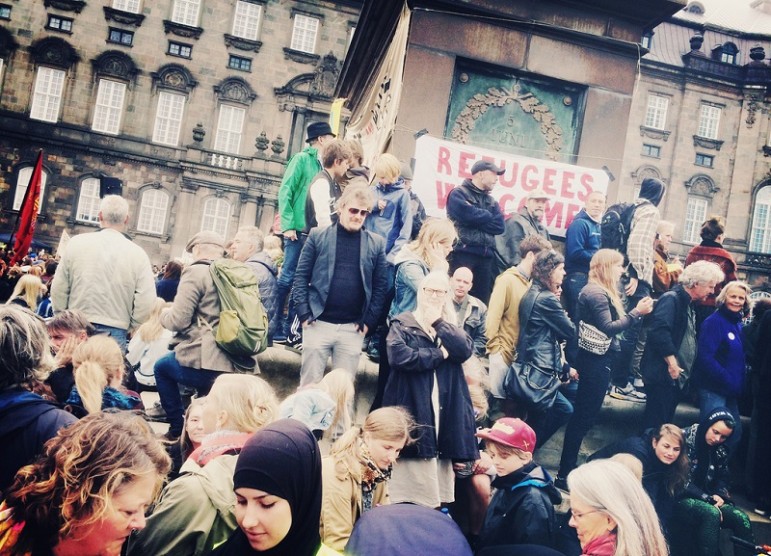 The New York Times reported this week that the Danish government has passed a strict new bill requiring refugees who come into the country to turn over to authorities cash and their most valuable possessions. The bill follows long and divisive debates about how to absorb what in Europe is the largest influx of refugees since World War II. As in other countries, including the U.S., many of the more drastic proposals are coming from politicians and others playing into people’s fears around immigration, porous borders, and terrorism.

Marcus Knuth, a member of Denmark’s parliament, defended the law, saying it was intended to make Denmark “a little bit less attractive” to those seeking asylum in Europe.

“We are a very small country of just 5 million people with a very, very generous welfare system, which makes us one of the most attractive destinations in Europe,” he said, adding that the country is finding it difficult to integrate the high numbers of those arriving across its borders.

In fact, “integration potential” is one factor that the law now authorizes Denmark officials to consider in resettlement cases. But of most concern to some is a provision requiring a waiting period of three years before asylum seekers can apply to bring their families to join them. Germany, too, under increasing pressure to slow the influx of those seeking refuge, has announced that it will require some migrants to wait two years before putting forth applications for their families to join them. For families trying to get their loved ones out of conflict zones and war torn areas, these requirements will be particularly difficult.

According to Amnesty International’s Europe and Central Asia director, prolonging the suffering of families torn apart by violence is “plain wrong” and “mean-spirited.” The law “seeks not only to pilfer the possessions refugees cling to, but also to needlessly lengthen their separation from loved ones.” The Danish Refugee Council echoed that sentiment, calling the reunification delays “very worrying and very inhumane,” while the Danish Institute for Human Rights accused Denmark of violating international law. The UN refugee agency (UNHCR) defines family reunification as a “fundamental and important human right,” and in its report on the legislation, called the new law a “deeply concerning response to humanitarian needs.”

As Edward Delman writes in the Atlantic, Denmark was one of the first countries to become a party to the 1951 UN Refugee Convention and has over the 20th century become home to refugees and immigrants from Soviet bloc countries, the Balkans, and the Middle East. But with the Syrian refugee crisis bringing in increasing numbers of asylum seekers (there were 21,000 in 2015 alone), the country has found itself in a tug of war between those wishing to accommodate them and those looking to stem the flow. Over the summer, in what Delman describes as “rather passive-aggressive tactics,” the Danish government advertised its plans to cut social benefits to refugees in newspapers in Lebanon (a country that is itself struggling mightily with this issue), proposed moving refugees to camps outside cities, and in one city, in a particularly hostile move, tried to mandate the placement of pork on municipal menus.

Immediately following the announcement of the new law, public criticism moved the Danish government to amend the confiscation of cash and property, allowing exemptions for items of sentimental value, such as wedding rings and family pictures. Artist and activist Ai Weiwei made headlines when he announced on Wednesday that he would close his exhibition, which was scheduled to run through the middle of April, at the Faurschou Foundation in Copenhagen. Jens Faurschou, the museum’s owner, stood by Weiwei’s decision and expressed regret that the “Danish parliament chooses to be in the forefront of symbolic and inhuman politics.”

Finland and Sweden also this week announced their own plans to deport tens of thousands of individuals who do not pass strict asylum requirements. Swedish interior minister Anders Ygeman estimated that approximately half of the 163,000 asylum requests received in 2015 would be rejected, while in Finland the government expects to deport roughly 65 percent of the 32,000 asylum seekers who arrived in the country in 2015.

In the Netherlands, plans have been revealed that show the country is working with other EU countries to send migrants back to Turkey, an idea Amnesty International criticized as “fundamentally flawed since it would hinge on illegally returning asylum seekers and refugees.”

The Organization for Economic Co-operation and Development and UNHCR are calling on governments to step up their efforts to help refugees integrate so that they can begin contributing to the societies and economies in which they settle. Speaking at a press conference in Paris on Thursday, UNHCR’s new head, Filippo Grandi, spoke about integration of refugees as a “two-way process” requiring considerable efforts on the part of both the individual and society. Pointing to the contributions the world’s refugees bring to their new countries, he reminded the audience that “Einstein was a refugee. We should not forget that.”—Patricia Schaefer