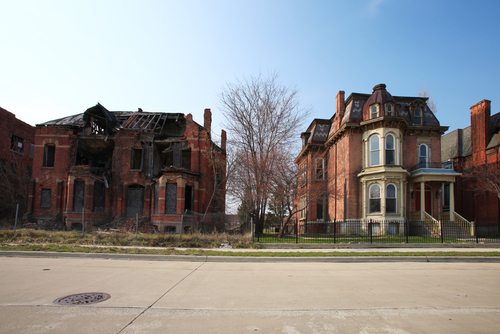 “Seen in a very simplistic way, this would be an exploitation,” Mendoza said last week from Berlin. “But seen in a profound way, this is about connection. I could do one of two things as an artist going back to my country and seeing problems that are inherent in the society. I could ignore them, or I could embrace them. I chose to embrace them.”

Already displayed at an art fair in the Netherlands, “The White House” is now headed to the Verbeke Foundation, a privately-owned museum that is open to the public.

Craig Fahle, director of public relations at the Detroit Land Bank, said, “Our job is to eliminate blight and restore neighborhoods. Regardless of the quality or intentions of the artist, it wasn’t something that we wanted to be involved in—highlighting the one thing we are working so hard to eliminate.”

Perhaps in response to the criticism, Mendoza now has a plan to ship additional façades of Detroit houses overseas to auction them (sigh) for the benefit of Detroit’s neighborhoods.—Ruth McCambridge