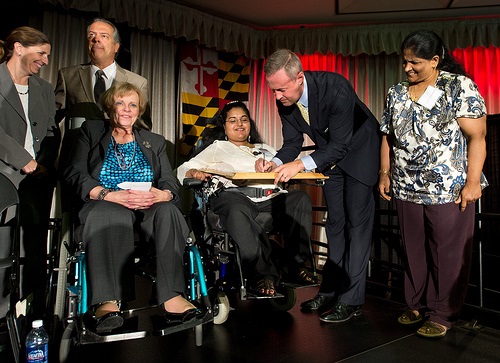 Persons with disabilities could and should be considered a population whose civil rights are, unfortunately, regularly ignored if not trampled. While some advocates have raised the civil rights dimension of disability issues, somehow the press and the public don’t address disability issues in this way. In light of the 25th anniversary of the Americans with Disabilities Act coming on July 26th, some disabled-rights advocates are taking their concerns to the streets—actually to the street in front of the White House.

A group called ADAPT organized some 200 persons to protest at the White House on Monday, with 54 of the demonstrators arrested for “blocking passage.” Specifically, the demonstrators called for enhancement of community-based living options as an alternative to institutionalization of persons with disabilities.

This isn’t an issue to be brushed off. One of the demonstrators, Flip Polizzi Rivera, who came as part of a contingent from Rochester, New York, tweeted that he would “rather go to jail than die in a nursing home.”

“I am forced to live in a nursing facility,” the 27-year-old Rivera said in a Twitter message before he was arrested. “I want to live in my own home. It’s important @BarackObama understands what we face.”

The alternative that Rivera and his colleagues are asking for is in-home attendants that allow persons with disabilities to continue living in their own homes. According to C. Jean Grover with the Regional Center for Independent Living in Rochester, providing in-home attendants is less expensive than forcing people into nursing homes.

“There is an institutional bias in our funding streams,” Grover told the Democrat & Chronicle. “The bias is that if somebody ceases to be able to function as they used to, the bias is to throw them into a nursing home rather than assisting them in managing their services. We have to readjust how the money is allocated. It’s a matter of managing services effectively to allow people to stay in their own homes.”

Grover sees this as a civil rights and human rights issue for persons with disabilities, which is the approach that ADAPT takes in its organizing. According to a statement on its webpage, ADAPT “is a national grass-roots community that organizes disability rights activists to engage in nonviolent direct action, including civil disobedience, to assure the civil and human rights of people with disabilities to live in freedom.” Like the organizing of traditional civil rights groups, ADAPT is pushing for new legislation to expand the rights of persons with disabilities to stay in their own homes, specifically by adding a new title to the ADA, the Community Integration Act, which would require states to offer community-based services first and offer people currently in nursing homes a community- or home-based alternative to their current living arrangements.

Although rights for persons with disabilities is not necessarily a partisan political issue, Congress hasn’t been in the mindset of passing much legislation that expands the rights of anyone, persons with disabilities or others, so ADAPT’s presence at the White House was aimed at getting President Obama to issue an executive order that would acknowledge the inhumaneness of warehousing persons with disabilities in nursing homes and take steps to affirm the rights of persons with disabilities to live in “integrated, least restrictive settings in their own homes and communities.” That tracks the language of the Supreme Court’s Olmstead decision, a landmark civil rights decision that is sometimes little recognized outside the disability community and subject to widely varying state-level implementation. Therefore, the ADAPT position also calls for the executive order to provide greater federal oversight over states’ implementation of Medicaid and specifically to promote adequate wages for home attendants. (ADAPT also calls for the president to name Vice President Joe Biden the nation’s “Ambassador for Community Living,” have him visit ten model programs for transitioning persons with disabilities into their communities, and convene roundtables across the country to develop effective community living integration systems.)

In an email from an ADAPT spokesperson late on Tuesday, ADAPT reported that a representative of the Department of Health and Human Services met with the ADAPT group and “promised to work with us on all our demands.” With that positive response from the executive branch, the ADAPT advocates split up, half going to the Democratic National Committee and half to the Republican National Committee to get both parties to support legislation to clarify and strengthen the community living mandate of the ADA and the enforcement of Olmstead.

Our response? Good for them! This is what direct action is capable of doing in the context of civil rights. Rivera and his companions weren’t just tweeting about the civil rights of persons with disabilities who are warehoused and incarcerated in nursing homes; they were putting themselves on the line, subject to arrest, to make a point, and that they did. As NPQ has written, there are multiple issues affecting persons with disabilities, not just community living, that suggest that this nation is a very long way from protecting the civil rights of the nation’s largest minority.—Rick Cohen