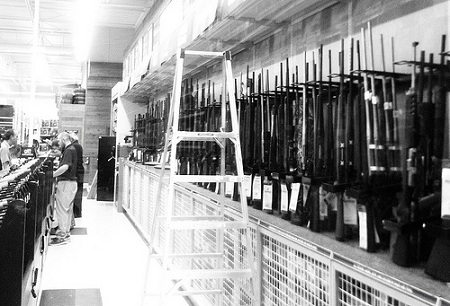 With a reported 353 mass shootings in 2015 (defined as four or more victims), the topic is front and center for news services. In June, NPQ reported on The Trace, a new media outlet financed by the Bloomberg organization focused solely on the topic of guns. (Unfortunately, the site has had a lot to recount.) In October, NPQ also covered the escalated gun violence in Chicago.

In a pointed coincidence in timing, several hours before the shooting in San Bernardino, significant physicians groups delivered a petition to Congress pressing lawmakers to end what it called an “effective ban” on gun violence studies by government agencies—specifically, the National Institutes of Health (NIH) and National Centers for Disease Control and Prevention (CDC). The petition contained over 2,000 signatures from groups including Doctors for America, the American Medical Women’s Association, and the National Physicians.

Jay Dickey, the former representative from Arkansas who led the effort to cut public funding from the CDC budget in 1996, seems to have buyer’s remorse. The day before the doctors’ petition arrived, he sent a letter to Rep. Mike Thompson, who chairs the House Gun Violence Prevention Task Force, calling for an increase in gun violence research.

“Research could have been continued on gun violence without infringing on the rights of gun owners, in the same fashion that the highway industry continued its research without eliminating the automobile,” Mr. Dickey wrote.

Alice Chen, executive director of Doctors for America and a physician at UCLA Medical Center, said that gun deaths are a critical problem for those in the health services. Even with President Obama’s executive order in 2013 calling for gun violence research at the CDC, she states that the agency still does not receive enough funding from Congress.

Former Speaker of the House John Boehner has stated, “I’m sorry, but a gun is not a disease. And guns don’t kill people, people do.” In answer to Mr. Boehner and others who have made similar statements, we bring the topic back to our sector for a closer look at the ability of NIH and CDC to do the research and gather funding. Both the NIH and the CDC have 501(c)(3) support foundations to accept funding and collaborative partners.

The NIH has many departments, and the Office of Behavioral and Social Sciences could house research on gun violence.

Those of us in the nonprofit sector know the mission statement is the rock an organization is built on. Despite the unfortunate name of the National Centers for Disease Control and Prevention, the mission of the agency states:

CDC works 24/7 to protect America from health, safety and security threats, both foreign and in the U.S. Whether diseases start at home or abroad, are chronic or acute, curable or preventable, human error or deliberate attack, CDC fights disease and supports communities and citizens to do the same.

CDC increases the health security of our nation. As the nation’s health protection agency, CDC saves lives and protects people from health threats. To accomplish our mission, CDC conducts critical science and provides health information that protects our nation against expensive and dangerous health threats, and responds when these arise.

Established by Congress, the CDC Foundation helps the Centers for Disease Control and Prevention do more, faster by forging effective partnerships between CDC and corporations, foundations, organizations and individuals to fight threats to health and safety.

Studies in gun violence would be perfectly in line with mission: “health, safety and security threats.”—Marian Conway