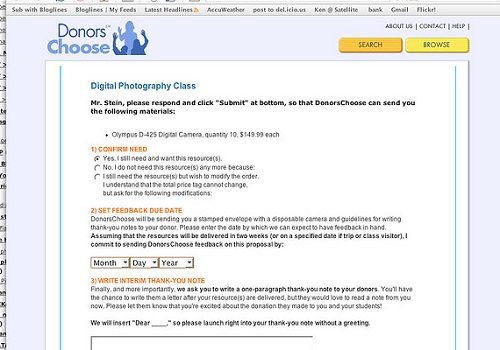 In the 13 years since its founding, the nonprofit organization Donors Choose has developed a strong reputation for being good at quantifying the work that they do. If you have a question about a statistic on this organization that aims to help public and charter schools fund specific classroom projects—total dollars raised, projects funded, average gift size, or schools and students supported, for example—well, they’ve got the answers. As a recent initiative, the organization’s Hacking Education site enables people to explore Donors Choose’s data and crunch it into a variety of forms. So while the decision from this organization to make this data available to the public is not surprising, for teachers and school administrators, some of the organization’s broad findings about the factors that make a project stand out to donors might be.

As a sample of the past thirteen years of data that is now available, Donors Choose has released a 2013 Giving Index highlighting the organization’s largest year of donor activity, representing 340,000 donors, $60.2 million in donations and over 130,000 projects. Some of this study’s most interesting findings relate to geography: Fifty percent of donors give to schools within 25 miles of their zip code, with Manhattan, Brooklyn, Chicago, San Francisco, and Oklahoma City (in ranked order) identified as being the most charitable cities for these projects. The study also revealed that Chicago, Houston, Los Angeles, Brooklyn, and the Bronx are the cities with the greatest need (or requests via Donors Choose). The fact that these lists do not match up exactly might be an issue worth exploring for both Donors Choose and for educators and administrators in those respective cities.

Donors Choose partnered with Looker, a data analytics firm, on this release and is promoting the fact that the data is now available for use by anyone with an email address. An invitation to review this relatively user-friendly data comes with a guide that explains things such as how to sort, how to use sample templates and a request that users save all “looks” on the site for the benefit of future researchers.

As an indication of things still to come, Vladimir Dubovsky, a data scientist at Donors Choose, explained by email that the organization would be “rolling out a series of new data dimensions, including school performance data, minority rates, school enrollment, budgets, pupil/teacher ratio and much more in the coming months.” Regarding the issue of possible gaps in classroom need and resources provided by donors, Dubovsky said in a follow-up email that this is the precise question his team was working on currently. “Stay tuned,” he said with the clear enthusiasm of a data scientist, “we are releasing something awesome for resource and gap analysis before June.”—Anne Eigeman