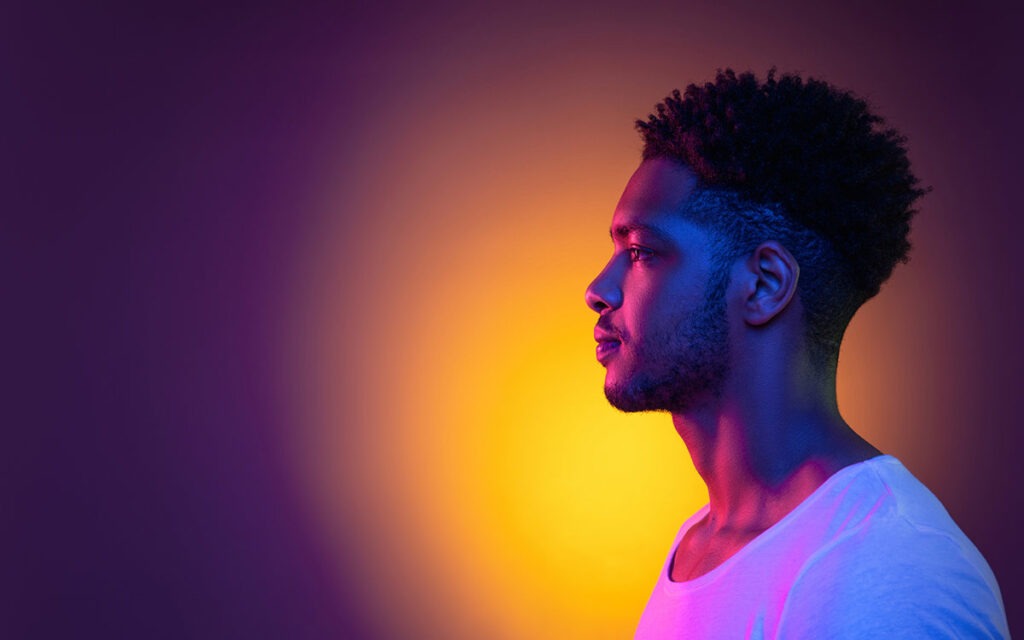 Breath and brotherhood are enormously important to the work of the collective of socially engaged artist-activists that I cofounded several years ago. The collective uses the arts not only to heal our communities, but also specifically to heal Black bisexual+1 men who endure daily the social violence of settler-colonialism, imperialism, white supremacy, capitalism, and cisheteropatriarchy. We need physical, social, cultural, and mental space to understand what it means to live at this complicated and wondrous intersection of ethnicity, race, gender, and sexuality that is Black bisexuality+ on our own terms and within value systems that give our experience meaning, our lives purpose, and our realities affirmation. In this way, our collective breathes the spirit of healing, restoration, and renewal into the life of our community.

If we rely solely on the world of traditional LGBTQIA+ philanthropy and the nonprofit-industrial complex, we will suffocate and die.

Too many people mistakenly believe that bisexuality doesn’t exist—or that it’s a phase on the way to accepting oneself as gay. Others wrongly believe that bisexuals enjoy all the same social privileges and advantages that straight people have. As a result, the funding landscape for bisexual+ needs and priorities has very little oxygen to breathe or sustain life. Organizations that are committed to those needs and priorities—whether social practice groups like ours or other kinds—must be creative and strategic to survive. Otherwise, as experience has taught me, if we rely solely on the world of traditional LGBTQIA+ philanthropy and the nonprofit-industrial complex, we will suffocate and die.

The year 2015 seems like a lifetime ago. By that time, I had spent half a decade working to address the needs of the silenced majority of LGBTQIA+ rights movement, bisexual+ people.

We are made invisible by this silencing: It is still shocking to most people that bisexuals make up over half of the LGBTQIA+ population according to multiple studies. Indeed, little has changed since Forty Years of LGBTQ Philanthropy, 1970-2010, a report published by Funders for LGBT Issues, which found that, in four decades, organizations that primarily serve bisexuals received less than one-tenth of one percent of LGBTQ-related funding.

I threw myself into work to combat this exclusion. With Dr. Loraine Hutchins, I co-edited a special issue of the Journal of Bisexuality on bisexual religious and spiritual concerns and later, with Robyn Ochs, co-edited the first collection of writing and art by bisexual men, Recognize: The Voices of Bisexual Men, for the Bisexual Resource Center. I participated in a White House convening on bisexual public policy issues and co-convened the event in a subsequent year. I traveled around the country speaking about issues affecting bisexuals and consulting on research projects related to bisexual health and wellbeing and the impact of funding inequities on our communities. And in 2016, I produced and directed, My Brother’s a Keeper, a play about Black male bisexuality, at the Bronx Academy of Arts and Dance’s Blaktinx Festival.

In four decades, organizations that primarily serve bisexuals received less than one-tenth of one percent of LGBTQ-related funding.It was exhausting, difficult work that isolated and alienated me from both gay and straight folks in the field who—whether they realized it or not—had biphobic prejudices and personal investments in the status quo that affected their ability to work in solidarity with or function as allies to bisexual+ folks. This was compounded by the white supremacy and anti-Black racism that I experienced in almost every space—including in LGBTQIA+ movement spaces.

I was suffocating. Given the impact of this work on my health and wellbeing, I had to make a change, one that was consistent with my values. I decided to refocus my energies on addressing the impacts of racism, patriarchy, and biphobia on my own community: the Black community. 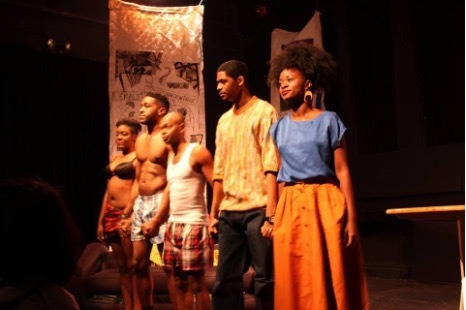 Honoring my need for an environment hospitable to my health and wellbeing, I reached out to two Black bisexual friends-colleagues of mine: the actor, writer, director, and producer, David J. Cork, and the visual artist, J. Christopher Dadefumi Fasanmi Fayemi Neal. I presented them with a vision for a collective of Black, male bisexual+ artists who would use the arts to educate, heal, restore, and renew our community and develop its ability to resist racism and biphobia.

No Homo | No Hetero (NH|NH), a welcoming and supportive space for an authentic way of being for Black bisexual+ men, was born out of that brotherhood. Instead of relying upon mainstream LGBTQIA+ philanthropy to provide us with oxygen, I have leveraged my social and professional capital to supply the financial air we have needed for our work. While the nonprofit-industrial complex has cultivated a culture in which nonprofit leaders, who may or may not come from the communities they serve, financially benefit through their employment and fundraising for these communities’ ongoing needs, I have worked to financially support the movement to end the ways the Black community has been affected by racism and biphobia. Contributing earnings that could supplement my modest teaching salary has not been easy. Although open to receiving financial support for our work, we were not willing to hold our breaths as we waited for racism and biphobia in philanthropy to miraculously disappear.

Money, however, is not our only resource. Culture is just as important.

Following an African tradition, we start our meetings by calling the names of our ancestors—by blood and choice—who inspire, teach, and guide us on our Black bisexual+ journey. We acknowledge our complex relationship to land as descendants of Africans kidnapped from their ancestral lands and enslaved in the Americas, and using prompts, we share check-in statements, giving us space and time to be thoughtful about ourselves and the lives we’re living. And we use contemplative, intentional breathing exercises to ground us in our bodies and the moment.

The dominance of the gay-straight binary in society demands of Black bisexual+ boys and men a daily confrontation with messages that deny the very existence of bisexuality+….

Authenticity can be a challenge for Black bisexual+ people of all genders—men, women, girls, boys, whether cis or trans, and folks who identify as nonbinary. For Black bisexual+ boys and men, the misogyny and patriarchy in our families, schools, communities, and workplaces imposes rigid and often toxic gender norms on us that has traumatic, long-term consequences for our bodies, minds, and spirits. When Black bisexual+ boys and men violate these norms—when we act authentically in this context—we experience physical violence, stigma, ostracization, loss of familial and community relationships, and other punishments.

The dominance of the gay-straight binary in society demands of Black bisexual+ boys and men a daily confrontation with messages that deny the very existence of bisexuality+ as well as the constant refusal to recognize, acknowledge, and appreciate our sense of self by people who may claim to love, care about, or support us. This social violence leads many Black bisexual+ boys and men to lose themselves and instead claim a gay or straight identity to fit in, have friends, develop love relationships, and/or maintain harmony in their families.

In a twisted irony, the same people who contribute to the conditions that are inhospitable to our living and development are quick to blame the victim, calling on Black bisexual+ men to publicly disclose their sexuality and castigating those who do not comply. This happens, for example, when a cisgender, heterosexual Black woman proclaims she would never knowingly enter into a relationship with a bisexual Black man while promoting the racist trope of the Black man on the downlow who cheats on women with other men. The stigma created by the association of Black bisexual+ men with this trope pressures us to choose one side of a false binary: heterosexuality or homosexuality. How reasonable is it to require—or even expect—people who are already hyper visible and under threat because of their Blackness to make themselves even more vulnerable to social violence by publicly associating themselves with a sexuality that has so much socially accepted prejudice and discrimination attached to it?

That is why spaces like NH|NH, which use cultural resources to heal and shift conversations, are so important to those of us who publicly identify with bisexuality.  The Black bisexual+ men and masculine-identified, non-binary folks who attend our monthly discussion group, Black Lotus Project, have, maybe for the first time, a space where they can take an authentic breath, build brotherhood with people in similar circumstances, and reflect upon their lives using the arts, contemplative and embodied practices, and critical thinking about race, gender, and sexuality.

As we create these spaces for Black bisexual+ men, we are equally committed to creating opportunities for all Black people to heal from the impacts of racism, biphobia, and cisheteropatriarchy on their bodies, minds, and spirits in culturally relevant, somatic, and creative ways for we believe racism, biphobia, and cisheteropatriarchy are problematic—not other Black people. We recognize that all Black people, regardless of their gender identity or sexuality, are victims of the interlocking matrix of oppressive systems, so we practice compassion for all members of our community.

True liberation can never be the private property of a single group; it is an experience and culture that touches everyone and permeates everything.

H. "Herukhuti" Sharif Williams, PhD, MEd (all pronouns), is core faculty in the undergraduate programs and co-founder and coordinator of the decolonial sexuality studies program at Goddard College. Founder and chief erotics officer of the social enterprise, the Center for Culture, Sexuality, and Spirituality LLC, Dr. Herukhuti is a sexologist, theatre artist, educator, documentary filmmaker, and poet who has contributed to Afrocentric, decolonial understanding of sexual fluidity and the sociocultural health of bisexual+ people past, present, and future. Dr. Herukhuti is the co-editor of the groundbreaking anthology Recognize: The Voices of Bisexual Men and author of the recently published poetry collection Race. Resistance. Love. Dr. Herukhuti is also co-founder of the Black bi+ artist collective No Homo | No Hetero, which is dedicated to eliminating racism and biphobia in the Black community.