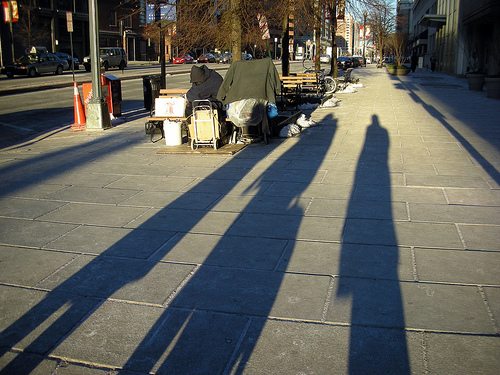 Mike Momany, a 62-year-old resident of Seattle and, according to Mark Byrnes in The Atlantic, “a self-proclaimed entrepreneur and West Coast nomad,” has come up with a money-making scheme for himself using that quaint, touristy concept of being homeless. He is offering a three-day, two-night homelessness tour for anyone willing to pay him $2,000. It’s not just money that would get one into Momany’s itinerary. Successful applicants have to pass an interview with Momany, “change [their]…look and persona” to be unrecognizable, and then receive a “nickname and a ‘simple life script.’”

His three-day tour would begin with a first day’s visit to several gathering spots of Seattle’s homeless population, then checking in to a shelter for the night in the International District. Day two would introduce participants to panhandling in public parks and sleeping on park benches to “get a real perspective on how the public perceives the homeless,” followed by conversations with homeless people at the Gates Foundation-funded Recovery Café and then joining other homeless spending time at the “beautiful” Seattle Public Library (“many homeless people spend their days here”). The third day would be more “homeless haunts,” ending “with a cocktail and conversation at a long time watering hole, a historic working class dive bar.”

The “social” in Momany’s “social enterprise” here is that his “Course in Applied Homelessness in Seattle” would give participants “a keener perspective on what it means to be homeless; [sic] a place all of us might not be to [sic] far from.” Momany’s website reads, “You will see the seedier side of Seattle in a new light and have an experience that you will never forget. Embrace the Experience!” If this were a fundraising effort to channel the moneys to nonprofits and shelters serving the homeless, it would merely be odious, placing real-life homeless people into a diorama for the education of tourists. But with no indication that the $2,000 fees would benefit anyone but Momany, the scheme lacks any semblance of a moral compass at all. (Sadly, it appears that Momany himself lives as a homeless person, sleeping nightly at an International District hostel and using the Public Library as his office.)

It seems that Seattleites have so far generally spurned Momany’s homeless ”Real-View Tours.” Like almost any fruitcake idea without humanity, there will be some depraved person who will take Momany up on his idea for humiliating and objectifying homeless people. Every shelter and every nonprofit serving homeless people should plaster Momany’s picture—before and after his homeless tour “persona”—on their walls and boot him out, should he show up with his homelessness tour participants in tow.—Rick Cohen