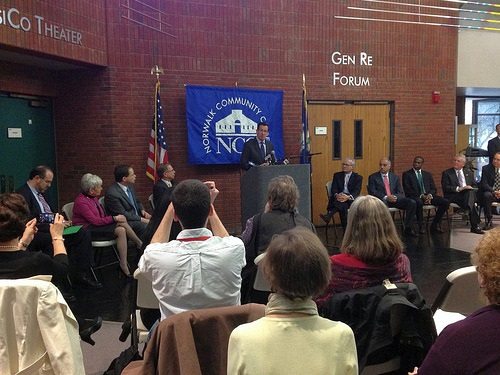 Someone in this story should have known better. In fact, everyone involved should have. The president of Norwalk Community College, David Levinson, brought his wife with him to a conference and three local charitable events. His costs were covered by the community college, presumably, but her costs were covered by the NCC Foundation, the private fundraising arm of the community college. Connecticut’s Office of State Ethics intervened to tell Levinson and the foundation that the donors to the foundation didn’t intend for the money to be used by a non-state employee like Levinson’s wife.

Levinson said he didn’t do anything wrong and the foundation knew that the money was for his wife. The foundation’s president, Eleanor Riemer, decided for some reason to issue Levinson a letter commending him for his “tireless fundraising and networking,” recognizing his wife’s positive role in fundraising and networking, and asserting that any violation of the state’s code of ethics had been “inadvertent and unintentional.”

It was a relatively small expenditure by the foundation—less than $1,000—but it cost Levinson or the foundation a penalty of $3,000 (the article said that the payment was from Levinson). However, the size of the amount doesn’t matter; the inappropriate expenditure wasn’t a one-time incident but a multi-event lapse of judgment.

Something, however, doesn’t sound right about this story. Shouldn’t either Levinson or Riemer have known that the expenditure of foundation money for a non-state employee wasn’t allowable per state ethics guidelines? Did the ethical faux pas require the letter from Riemer of encomiums for Levinson?

Interestingly, the state’s ethics office determined that state funds, even if generated by private donations, are subject to state rules, which gave the Ethics Office the latitude to intervene. But that shouldn’t have been needed. The private fundraising arms of public institutions should be very careful and very appropriate about the moneys they raise. And if there is an inappropriate expenditure, as in the case of Levinson, the best course is to admit the error, not fight it, and not issue reputation-building after-the-fact letters that simply make investigators want to look for more.—Rick Cohen