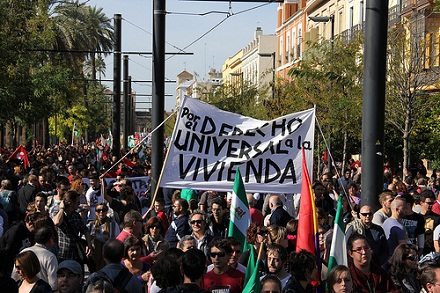 On Wednesday in Spain, Portugal, Italy, Greece and Belgium, workers took to the streets at the urging of the European Trade Union Confederation (ETUC) in a “day of action” against economic conditions across Europe as well as the austerity measures that have been put in place to address them. The protests, which union leaders called historic, involved hundreds of thousands including railroad workers in Belgium; airline, autoworkers, and teachers in Spain; civil servants in Italy; and transit workers in Portugal, among many others. In some locations, there were general strikes targeting transportation. It was estimated that 300,000 demonstrated across a number of cities in Italy. In Barcelona, 100,000 protested. In Madrid, where the crowd was described to include “hundreds of thousands,” union leader Candido Mendez said of austerity measures, “The government is taking us to the abyss.” In France, 130 different demonstrations were planned and a joint statement from French unions expressed “strong opposition to these austerity measures that are plunging Europe into economic stagnation and recession,” thus threatening the European social model.

The economies of some of these countries are, of course, in very bad shape. Spain and Greece have unemployment rates that now hover at at 25 percent and Portugal’s sits at almost 16 percent (and is more than twice that rate among young people in Portugal). In this context, many fear that government “austerity measures” will make matters far worse. The participation of both Spain and Portugal make this the first joint strike on the Iberian Penninsula. –Ruth McCambridge