Evicting Your Grandmother to Offset the Costs of Child Abuse? Just Good Business for this Archdiocese

Apparently, the Boston Catholic Archdiocese is willing to cart the dedicated parishioners of St. Frances Xavier Cabrini Roman Catholic Church off in handcuffs as early as Friday.

The church has been occupied by those who worship there for the past eleven years since it was slated for closure. They have altered their lives to stand 24-hour vigil over the church. The sense of ownership they feel for it was encouraged by the Archdiocese until its decision to sell the property in scenic seaside Scituate, Massachusetts, which has an estimated value of a cool $4 million.

“I find it beautiful,” says 82-year-old Nancy Shilts. “Mostly, it’s quiet. I go for a walk around the inside of the church, so that I get my exercise. I watch TV. I do a lot of praying.”

But a state judge has ordered that the protesters vacate the premises by as early as Friday. Those protestors declare they will not voluntarily leave, instead insisting that the Boston archdiocese restore the standing of the parish or simply sell them or the building.

“This is our spiritual home,” says Jon Rogers, a leading organizer. “We’ve been taught for years that this is our church and that it’s our responsibility to care for it.”

Thomas Groome, a Boston College theology professor, says that this is the longest lasting of the six church occupations that occurred in 2004 when 77 churches were closed. On top of the feeling of having a beloved community space with strong neighborhood investment wrenched away, Groome says that some of what fuels the protest is lingering upset about the connection to the sexual abuse scandal, since St. Frances Xavier Cabrini was among the churches where children were abused by priests. Jon Rogers confirms this feeling, saying, “What the archdiocese has done is sell off our beloved churches to replenish coffers depleted by the sexual abuse scandal.” 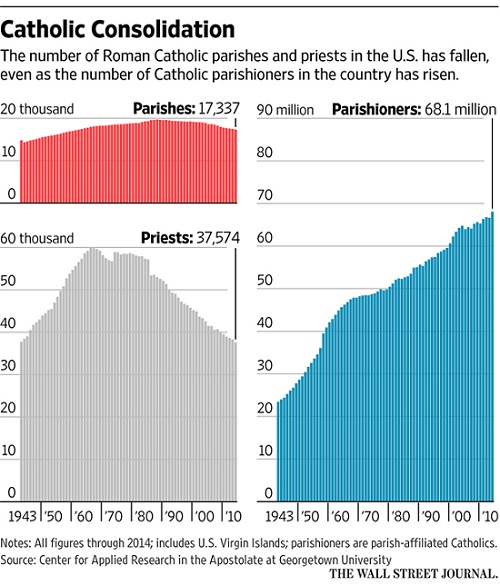 The church says that there is more at play, pointing to the fact that while the number of parishioners is rising, the numbers of priests are on the decline…as are (ahem) parishes, as shown in the graph above printed in the Wall Street Journal.

We might suggest that, if there were perhaps some reconsideration of the role of women in the church and of the requirement for clergy to remain celibate, this desperate lack of spiritual leaders might be easily addressed. Meanwhile, as the church acts as if they are forced into a corner by the availability of priests, parishes are set to self-organize.

“We’ve drawn a line in the sand,” Rogers said, “and said this needs to stop now. How many communities need to be destroyed?”—Ruth McCambridge