A lot of people ask me what factors they should consider when deciding which charities to support. It’s a tough question. And an important one. So I turned to one of the experts.

Dean Karlan is a Yale professor who co-wrote the book More Than Good Intentions, which dispels myths about foreign aid and development while providing insights into what really helps the world’s poor.

Karlan is a big fan of rigorous field studies. Many have been carried out by his research group, Innovations for Poverty Action. Karlan founded the organization because he believes ideas must be well-tested before they’re rolled out and scaled up.  Even so, Karlan admits donors don’t often base their decisions on data and field tests. “A lot of people are choosing charities based on what they have some personal connection to,” Karlan tells us. “And when people give to things they don’t have a direct personal connection to, it’s still often done based on very limited information about what’s really working.” 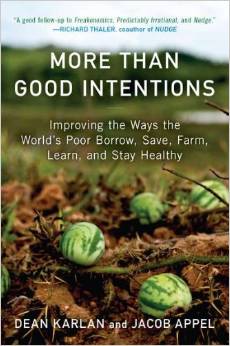 Karlan’s book delves deep into microcredit, that widely celebrated idea to lift the world’s poorest out of poverty by giving them small loans, often at high interest rates. Karlan has looked closely at the data on microcredit. “We have not found anything remotely like lifting people out of poverty,” he tells us. “If I were a donor, there’s no reason to support this.”

But even when there’s evidence that a program is effective, donors don’t always respond in the ways you might expect. In a paper entitled “The Effect of Effectiveness” Karlan and his colleagues sent direct mail campaigns to donors who had recently given to a specific charity. Karlan found that including information about the charity’s effectiveness increased subsequent donations among big donors. However, among small donors, receiving data about a charity’s impact actually led to decreased donations to the charity. “Talking too much wonky stuff about aid effectiveness turns off the heart and turns on the mind,” Karlan explains. “But it’s the heart that writes the checks, not the mind.”

If you want to use evidence instead of your heart when deciding which charities to back, Karlan has a couple of suggestions for you:

GiveWell spends thousands of hours finding top-rated charities, which are “evidence-backed, thoroughly vetted, and underfunded.” (Disclosure: GiveWell has recommended Karlan’s Innovations for Poverty Action as a “standout organization” in the past.)

Evidence Action used to be a part of Karlan’s Innovations for Poverty Action. It currently champions two projects. One deworms school children by giving them parasite-killing drugs at relatively low cost. It also backs a chlorine dispenser program, aimed at tackling diarrhea, a leading cause of child mortality.

If you want to search for a specific charity or see how a broader range of nonprofits are rated, head over to Charity Navigator. This organization rates thousands of charities based on a set of criteria that includes a nonprofit’s financial health, transparency and results reporting. GuideStar enables you to search the Form 990 tax returns of any IRS-registered nonprofit in the United States.

As always, we welcome your comments on Karlan’s evidence-based approach to aid. Do you agree that rigorous field testing and randomized control trials should form the basis for more aid projects? What is the role for less scientific approaches to global development work?