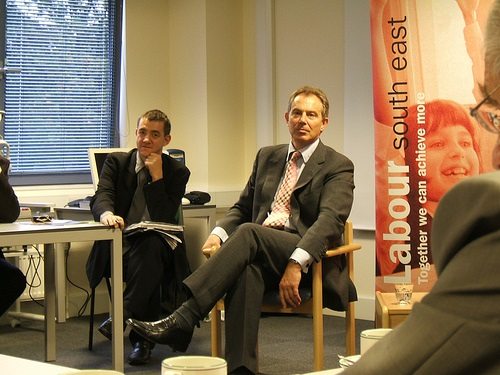 Winning an award doesn’t erase controversy. Men’s magazine GQ just announced former British prime minister Tony Blair as the winner of its “Philanthropist of the Year” award. Since leaving 10 Downing Street, Blair has been an active philanthropist, creating three foundations to work on issues ranging from the governance of African nations to matching kids with sports coaches in Britain’s North East to efforts to reconcile the beliefs of “the three Abrahamic faiths.” In addition to his institutional philanthropy, Blair has been active individually, including functioning as sort of a “Middle East peace envoy.”

The Blair award immediately generated criticism in British circles, which pushed GQ into a defensive stance trying to explain and justify its selection. The Blair controversy completely overshadowed GQ’s other award presentations “Humanitarian of the Year” Ringo Starr (for helping children in war-torn countries and military veterans deal with PTSD through transcendental meditation) and Scotland First Minister Alex Salmond, who scored the politician of the year award (though he didn’t show up for the awards ceremony).

Some of the criticism of the award to Blair undoubtedly emanates from his support of President George W. Bush’s invasion of Iraq in 2003, during which he asserted in terms as strong as any that Bush ever used that the evidence of Iraq’s possession of weapons of mass destruction was “beyond doubt.” Criticized by much of his own Labour Party for the UK’s allegiance to U.S. policy in Iraq and Afghanistan, Blair’s popularity plummeted sharply as the war went on until he resigned as prime minister in 2007.

However, Blair’s post-PM role also engenders raised eyebrows about his philanthropic oeuvre. While Blair has maintained an apparently active role in the three foundations he established, his work outside of foundations has included serving, beginning in 2008, as a senior advisor for JPMorgan Chase—hardly the typical next stop for Labour PMs after leaving office. Among his consulting gigs (through Tony Blair Associates) was providing advice to the Kazakhstan government headed by the brutal autocrat Nursultan Nazarbayev. The NPQ Newswire in 2012 covered Blair’s consulting relationships with both Nazarbayev and President Ilham Aliyev, the no less despotic ruler of nearby Azerbaijan. As PM, Blair was uncompromisingly critical of Iraq’s Saddam Hussein, at various times declaring that the invasion of Iraq was justifiable even without Hussein’s possession of WMD, but it was reported that Blair-the-consultant was willing to advise Muammar Gaddafi’s son, Saif, on his PhD thesis and meet several times privately with the Libyan leader himself.

To be fair to Blair, other politicians-turned-philanthropists have had dealings with the questionable leaders of various nations. Nonetheless, it would be important for serious philanthropists to weigh in as to whether the mix of Blair’s roles qualifies him for a “philanthropist of the year” award this year or in any year. Sadly, most institutional philanthropists and their trade associations steer clear of commentary on the specifics of individuals’ or foundations’ philanthropic bona fides. Does Blair qualify to be anyone’s “philanthropist of the year”? Perhaps the answer is hinted at in the fourth of the awards presented at the Blair ceremony: GQ’s “Woman of the Year” award went to Kim Kardashian.—Rick Cohen