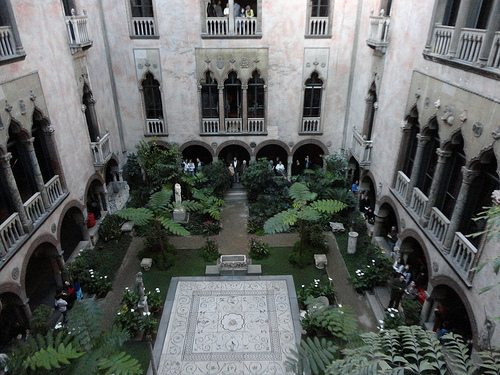 There are any number of iconic stories of Boston-based crime but the art heist from Boston’s famed Isabella Stewart Garner Museum is in a class by itself.

Established in 1903 with a million dollar bequest, the Gardner Museum provides an intimate setting for its world-class collection, comprised of 2,500 pieces of American, Asian and European art. The museum itself is built in the style of a 15th century Venetian palace. The Gardner offers a concert series and its courtyard is a place of bliss.

But in 1990, two men disguised as police disrupted the scene by conning a security guard at the facility into letting them into the museum after hours. They then told him that they had a warrant for his arrest and persuaded him to come out from behind the desk and away from his alarm button. After making him summon the other guard, the thieves bound the two guards up with duct tape and took a full 81 minutes to remove 13 paintings, including pieces by Rembrandt, Degas, Monet and Vermeer. The guards were found the following day by the next shift. None of the paintings have been recovered and the Gardner job is considered to be the biggest museum art theft in history.

Now the FBI seems to be back on the case and their people of interest appear to be a bunch of aging wise guys, or at least guys connected to guys who were connected. But what is really interesting is the fact that the FBI is considering an ad campaign, à la their famed Whitey Bulger blitz, that focuses on the art itself, as in “Have you seen this painting? Please contact _______.” So we thought we’d do our part by providing a link to the paintings in question. Let us know if it leads to their recovery and your enrichment!

The Gardner Museum has offered a $5 million reward for information leading to recovery of the paintings in good condition.—Ruth McCambridge