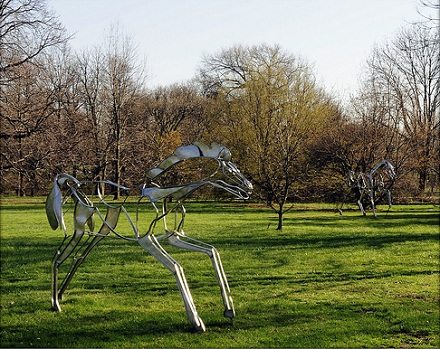 In this era of government funding cutbacks threatening arts and culture programs, even when the public steps up to stand behind Big Bird and PBS, there are precious few voices calling for localities to maintain their commitments to public art. It is kind of shocking to see experts like Susan Weiler of the University of Pennsylvania having to “make the case that ‘public art is important’” in a presentation to the American Society for Landscape Architecture. If landscape architects need that message, perhaps NPQ Newswire readers do, too.

According to Penny Balkin Bach of the Fairmount Park Art Association, public art is often “under appreciated,” but she points out its attractiveness to everyone: “It’s free. There are no tickets. People don’t have to dress up. You can view it alone or in groups. It’s open to everyone.”

And it is often very creative and edgy. For example, in Philadelphia, a new piece by Mexican artist Rafael Lozano-Hemmer called “Open Air” recently opened. The piece is “a set of 24 high-powered search lights coursing through the night… activated by the voice and GPS location of the crowd, who leave message(s) via a Web site…[that] are converted into light arrays every night from 8-11.” In the Culver City, Calif.-based Sony Studios, there is Tony Tasset’s 94-foot rainbow, viewable from miles around. Public artist Janet Echelman is now working on a project in Dilworth Plaza at Philadelphia’s City Hall that, according to this Sustainable Cities Collective article, will be “Layers of colored lighting, glowing in water mist that will amazingly leave no water trace on people who walk through it, [that] will illuminate the path of the green, orange, and blue subway lines running under the city, tracing the path of the trains in real time.”

One doesn’t have to be an artist to appreciate the role of public art in America’s cities. As one of the experts in the article indicated, public art makes you slow down and appreciate what is around you. There is more texture and substance to the community and the environment when it is infused with public art. It can be breathtakingly modern, but it doesn’t have to be. Public art displays become landmarks for residents to see, appreciate and make a statement about their communities. The “hands” sculptures in Berea, Ky., the Snoopy sculptures in St. Paul, Minn., and the “Nanas” in Hannover, Germany are examples of public art that lend definition to place.

Some cities require that developments allocate part of their construction costs for public art. But that practice seems to be fading away in the U.S. as municipalities and developers hone in on the bottom line with little interest in niceties like sculpture and design. Some cities, such as San Jose and Dallas, have required a portion of city-financed capital improvement projects be set aside for public art, but that only promotes public art at public buildings and public parks. For public art that is built on privately owned lands and spaces, charitable fundraising, creative earned income strategies, corporate sponsorships and foundation grantmaking are necessary.

But does public art rise high enough in the community revitalization agendas of major foundations to attract their attention when they are investing in redevelopment and renewal projects? Where is the philanthropic sector on public art?—Rick Cohen