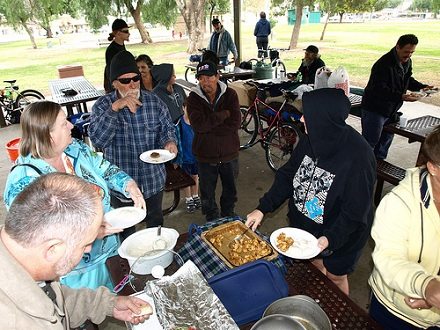 In Philadelphia, local religious groups are feeding the homeless even though the city has banned this practice except in confined locations. Homeless advocates say the city wants the homeless run out of tourist areas. While a judge tries to figure it all out, poverty experts say it’s just part of a trend to crack down on panhandling, sleeping in public places and other facets of homelessness.

The tension in Philadelphia began when the mayor announced a ban on the outdoor feeding of the homeless. According to press reports, Michael Nutter has numerous reasons for the ban: he wanted to prevent food-borne illness; he wanted to protect city parklands from damage; and he said he wanted to help charitable agencies reach the homeless more easily. He argued that if religious and other groups could only provide food indoors, homeless folks could also get physical and mental health treatment in the same place they got food.

But four charities sued to city to block implementation of the ban. They accuse the mayor of wanting to clear homeless people out of Benjamin Franklin Parkway, home to tourist attractions like the Philadelphia Museum of Art, the Rodin Museum and the newly relocated Barnes Museum with its crowd-pleasing works of art. The leader of Chosen 300 Ministries, Pastor Brian Jenkins, told NBC10 News in Philadelphia that he has a calling to feed the homeless. A judge blocked enforcement of the ban for 120 days, but when that block was lifted on July 14, Pastor Jenkins was back ladling out the soup on public streets, threatening to defy the law if it is enacted.

The same tensions are playing out across the country, as 50 cities have passed anti-camping or anti-food-sharing laws. According to the National Law Center on Homelessness and Poverty’s latest report, those same cities have recently seen an increase in overall homelessness and family homelessness. Those cities also lack the emergency shelter space needed to cope with the growing problem.

The report cites what it considers constructive approaches that could be more effective than criminalization. In Portland, Ore., 24-hour-a-day public restrooms cut down on the need for public urination and defecation. Orlando, Fla. government and nonprofits are helping homeless people get the government documents they need to find housing, jobs and public benefits. Seattle, Wash. repealed a policy that allowed police to arrest homeless people hanging out in stores or coffee shops. The report calls upon the federal government to take a larger role in discouraging the criminalization of homelessness. –Mary Jo Draper