Three hundred people applied to be on the “Ferguson Commission” created by Missouri Governor Jay Nixon to do something—what, exactly, isn’t clear—about the social and economic conditions that have been linked to the killing of unarmed teenager Michael Brown and the subsequent protests against Ferguson’s nearly all-white government and police departments, the militarized police response to the protests, and perhaps the cluelessness of some of the region’s political leaders about the racial tensions occurring under their noses.

Yesterday, Nixon swore in the 16 people he selected for the commission: 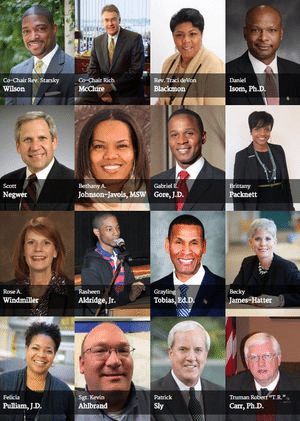 The Post-Dispatch provided the list of members, as well as excerpts from their statements of why they wanted to serve:

It may be due to the excerpts chosen for publication by the Post-Dispatch, but the printed statements of the members other than Aldridge, the obviously youngest member of the commission, don’t specifically address race as one of the underlying issues to be understood and confronted. The statements from Windmiller and Johnson-Javois suggest that the inequities that some people in metropolitan St. Louis experience aren’t simply happenstance, but systemic, and both overt and covert in their causes. Their comments also suggest an awareness of the structural racism issues that were reflected in the Ferguson dynamics.

We’ve included in this newswire some of the Twitter handles for members of the commission, which we presume that the Post-Dispatch printed so that its readers could reach out to them with ideas and suggestions. We suggest the same: Tweet these members and tweet NPQ as well (@NPQuarterly) to let them and us know what you think the commission could and should do.—Rick Cohen