Ferguson, L.A. and Beyond: Excessive Lethal Force in Police Actions 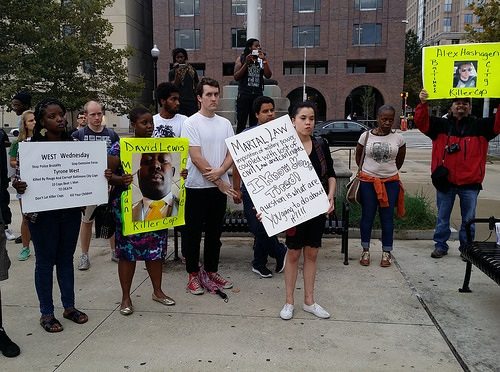 One of the challenges of bringing peace to the streets of Ferguson, Missouri is the perception that Mike Brown’s death at the hands of a Ferguson policeman is no aberration. Some observers see it as the extreme end of the continuum of the public’s criminalization of black men, the assumption that any particular young black man is a possible threat and warrants police action that would not be typical for white boys and men.

Recent shootings in Los Angeles have prompted community reactions just as critical of the police as in Ferguson. Ezell Ford, 25 years of age, and Omar Abrego, 37, are two young men who died recently at the hands of local police. Described by his family as “mentally impaired” (dealing with schizophrenia, bipolar disorder, and depression), Ford was shot by police officers, but, much like those of the shooting of Mike Brown in Ferguson the accounts differ: Ford’s family says that Ford was lying on the ground and complying with police orders when he was shot, but police sources say that Ford ignored the police orders, walked away, then grabbed an officer and tried to wrest his service revolver away from him.

Although they didn’t get a lot of attention while the Ferguson protests were going on, Los Angeles groups organized a protest march that apparently attracted several thousand participants. Among the march organizers were the Coalition to Defend Affirmative Action, Integration, and Immigrant Rights and Fight for Equality By Any Means Necessary (BAMN). Earl Ofari Hutchinson, the founder and president of the Los Angeles Urban Policy Roundtable, told the press that several African-American organizations were calling for meetings with the Los Angeles police chief to explain what led to the shooting of Ford.

Conversations with the police didn’t start off well. Two issues seemed to be at the forefront of concerns about the Ford shooting. One was probable cause: What might have been the probable cause for the police to stop Ford, which ultimately ended with his death? The other concerned the amount of force used by the police. “Maybe common sense can be used instead of a gun,” said Minnie Hadley-Hempstead, the president of the Los Angeles branch of the NAACP, at a public meeting on the Ford and Abrego killings.

How much force is necessary to stop a potential assailant, if that is what Ford—or Mike Brown—might have been? Did it take six shots to stop Mike Brown, assuming he was doing something other than surrendering with his hands up? Did it really take multiple shots by the police in the city of St. Louis this week to stop a 23-year-old man who allegedly was brandishing a knife? Even if Mike Brown really did shoplift some cigarillos or cigars in Ferguson, or if the person shot in St. Louis, Kajieme Powell, had boosted two energy drinks and a pastry, did they have to die for those alleged petty crimes?

Why is it that the progress made over many years in implementing community policing strategies seems to have become a distant memory in the wake of the shootings in Ferguson, St. Louis, and Los Angeles? For some years now, the U.S. Department of Justice has been distributing community policing grants that bring nonprofits and police departments into partnership, working with the community to reduce tensions and to improve police responses. Those grants weren’t just to quell community disturbances, like those in Ferguson, or protests as in Los Angeles, but to change the police attitudes and practices toward young black men for whom police stops sometimes come with a predisposition toward pulling one’s gun.

Some of the most successful police officers working in high-crime areas express pride in never having had to discharge a firearm. Police have an intensely difficult job, making split-second decisions about the community’s safety and their own. Nonetheless, there is something going wrong in policing lately with the spate of controversial deaths in a number of cities. Hopefully, the civic sector—nonprofits and foundations—can bring value to the discussion to create avenues for improved relations between police departments and the communities they serve and, in the process of doing so, help disabuse some police departments of the propensity toward using lethal force too readily.—Rick Cohen