Ferguson’s Grand Jury Verdict: How to Weigh In, Wherever You Are 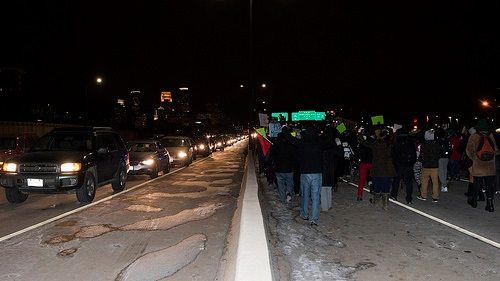 What can you do to protest, to get involved, to weigh in on the non-indictment of Officer Darren Wilson in Ferguson?

Something called the Ferguson National Response Network, described in USA TODAY as an “informal group,” has a list of demonstrations planned around the nation, roughly a count of 174 scheduled to have occurred on the day of or the day after the grand jury announcement. Several advised marchers to wear black, and in Phoenix, marchers were also told to cover their faces. Many of these protests were planned long before the announcement, making it difficult to determine from a distance which happened and which didn’t, or to identify other marches that did occur that weren’t on the Ferguson Action website.

Something feels somewhat Occupy-ish about these marches. They will bring the Ferguson situation into communities far away from St. Louis, but where they will lead, what they will add up to, and how they will move the attitudes of ordinary Americans, that all feels like it might be something of an Occupy rerun. The issue in the marches gets lost in the rhyming chant, “no justice, no peace, no more racist police.” That takes the movement into an over-focus on policing, when in fact Ferguson highlighted much broader national problems. It doesn’t lead to an effective course of action.

Correcting the biases and problems of police departments—overmilitarization, inappropriate and excessive violence, racial profiling, lack of diversity among officers, etc.—requires getting to the root of the problem rather than attempting to somehow excise cops who somehow reveal themselves as racist. Remember, as john a. powell consistently points out, the problem is often “unconscious bias” held not only by overt racists, but by many people who see themselves as quite liberal and egalitarian. There’s no quick fix to unconscious bias.

“We need to address the pervasiveness of unconscious biases, first by acknowledging them, and secondly by working to reduce them,” powell writes. “Police academies and law enforcement agencies not only need more diverse staff, they need implicit bias training for officers. They need to measure, track, and address implicit bias, enhance officer supervision, and create accountability measures.”

To be fair, in the Ferguson protests occurring around the nation, according to a summary of the results of a nationwide conference call distributed by [email protected], protesters are advised to emphasize four messages:

Accompanying the email was a document titled “National Demands,” containing six specific demands that, as expected, mostly focus on policing:

Learning from the Occupy process, the Ferguson Action effort has generated specific demands, though most focus on police issues. That makes immediate sense, as the issue involved a police action that caused the death of a young man and the police response to protesters in August with a distinct military tone and presence. Nothing in that agenda deals with the amazing and consistent lack of political leadership in Missouri—a disengaged governor (Jay Nixon), an overempowered county prosecutor (Bob McCulloch), a nearly all-white, tone-deaf, and clueless Ferguson government. Add to that, as we have pointed out before, an obviously underdeveloped nonprofit infrastructure in Ferguson and other inner ring St. Louis suburbs. The political underpinnings of the Ferguson dynamic in Missouri and in other situations of alleged police abuse in other localities around the nation do not appear to be part of the agenda, at least as of yet.

That seems to be the strategy of a number of other organizations and coalitions geared to a more political agenda, with achievable demands to be brought to the attention of legislators, governors, mayors, and police departments. This is where an appreciation of the political underpinnings of structural racism must be addressed. National groups are making statements and organizing for actions that go beyond the Ferguson city limits.

MomsRising, a self-described grassroots women’s organization aimed at amplifying the voices of women on public policy issues, particularly paid family leave, paid earned sick days, and affordable child care, issued a public statement and is calling for public endorsements and signatures. The MomsRising statement, the same as that issued by ColorOfChange, an Internet-based organizing effort focused on issues of concern to blacks, is a letter to President Obama and Attorney General Holder asking for the arrest and prosecution of Darren Wilson under federal law, defense of protesters’ rights of free speech, and an overhaul of the police practices that they contend are alleged to have contributed to Mike Brown’s death. Other statements calling for change have been issued by CREDO Action, a group that raises money for progressive nonprofits through revenues generated by CREDO’s mobile phone business, Working Families, a political movement geared to “electing the next generation of progressive leaders,” and the Center for Constitutional Rights, a 40-year-old organization that uses litigation for social change,

Like the Ferguson Action marches, these statements, too, focus on police action, but the organizations usually address a variety of issues. CCR, for example, typically takes on such issues as employment discrimination, domestic violence, women’s reproductive rights, abuses of government power, immigration rights, and other topics that are likely to be involved in broader discussions of the structural racial issues—and political issues—underlying the policing issues that the protests have targeted. Ultimately, the need is for political action to undo the feckless leadership on these issues that has been so clear at the federal and state responses to Ferguson. ColorOfChange is representative of the kind of organizing effort that can take the “local” issues of Ferguson and elevate them to broader political strategies.

And you can be a witness.

That is the action that we can all carry out, when people dismiss the protesters in Ferguson as “those people” or otherwise dehumanize and disparage a kid who, for whatever he might have done in his life, was a son with parents who loved him, a young man who was killed while unarmed, and whose killer won’t have to face a criminal trial.

Erica Williams Simon writes in Time that one thing to be done is to tell the story of Ferguson correctly and accurately—and to resist efforts like those of St. Louis County prosecuting attorney Bob McCulloch, who took to the airwaves immediately after the announcement of the grand jury decision to provide his own story of the grand jury process, exculpating himself from responsibility for the grand jury decision. The implication of her comment (for those of us who aren’t among the hordes of bloggers and videographers outside on South Florissant Street and across the nation) is that we can correct the mistaken narratives of Ferguson that we might encounter within our families, among our neighbors, and with our workplace colleagues.

Moreover, we can tell the story of Ferguson in its proper context, as what happened there and what might yet happen isn’t just about Ferguson. As john a. powell points out:

“The spotlight on Ferguson has revealed with a renewed, sharper focus a deep divide in our society highlighting persistent systemic inequalities…What we are witnessing is a reflection of a systematic failure in our society that is revealed wherever we are willing to look—schools, health care, employment, housing, life expectancy, poverty, and the list goes on. The problem is persistent, cumulative, and deeply debilitating.”

Finally, we can all focus on building an effective civil society in the inner ring suburbs of American cities. The lack of leadership evident in Ferguson has been appalling. Even in the street protests, the invisibility of local elected officials has been telling. Political institutions, nonprofit institutions, and political and nonprofit leaders in suburban St. Louis have not demonstrated the kind of presence that one would expect to see in the world’s most developed democracy with the strongest array of nonprofit and voluntary organizations. The issues in Ferguson, the death of Michael Brown, and the grand jury’s unfathomable inability to find probable cause in the shooting all reflect civil society shortcomings that have to be addressed and corrected. Unless this nation builds a strong civil society in the nation’s troubled inner ring suburbs—and unless this nation strengthens its civil society institutions led by and accountable to communities of color—the issues underlying the racial divides highlighted in Ferguson will persist.