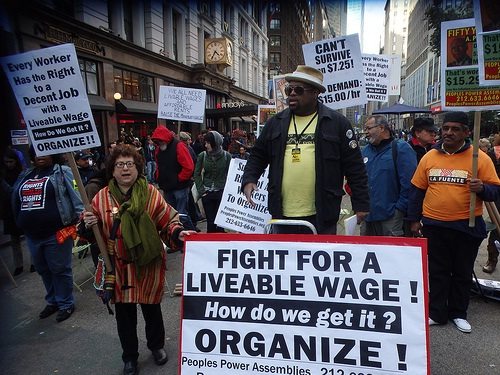 In reaction to NPQ’s coverage of President Obama’s plan for addressing the needs of the long-term unemployed, many readers commented that they were less than impressed with the president’s strategy, though they were far more unimpressed by the unwillingness of Congress to do anything to help the well over one million people who lost their emergency unemployment benefits in December. The president’s overall strategy on jobs, as outlined in his State of the Union, seems to be that he hopes that Congress will take action, but if it doesn’t, he will through issuing executive orders that have the force of law, at least for the duration of his presidency.

But there is even more—or, rather, less—to the picture. The executive order would not cover those federal contract workers who are vocational students or disabled workers, who have been consistently exempt from Fair Labor Standards Act wage protections overall. These 14(c) program workers are federal contract employees paid less than a minimum wage if they are in certified training programs, so-called “sheltered workshops.”

Some observers of federal contracting rules view 14(c) programs as a “policy relic” that permits employers to pay disabled workers as little as pennies per hour worked, on the theory that employing the disabled served as charity, not really training for self-determination and sustainability. The reality of 14(c) programs is that a very small percentage of 14(c) graduates get jobs in the regular labor market, regardless of what training and support they get as subminimum wage federal contractors.

While some service providers and employers support the notion of paying disabled workers as charity cases expected to be able to do relatively little with their lives, the president’s executive order has provoked many advocacy organizations to demand that there be no exemption for the disabled from the $10.10 minimum. Estimating that there are 400,000 workers already exempted from the Fair Labor Standards Act, the National Federation of the Blind called on President Obama to extend his executive order to federal contract workers with disabilities, arguing that disabled workers should not be exempted from the executive order, with their disabilities considered “badges of inferiority that condemn us to a life of low wages and low expectations.”

This week, a number of disability rights advocacy groups sent a letter to the President asking for the inclusion of disabled workers in the executive order. It may be that the actual number of federal contract workers in 14(c) programs is more like 50,000, but this might be the right time to rectify a major shortcoming in the president’s executive order and in the existence of sheltered workshops under 14(c). The signers of the joint letter to the president included the Autism Society, the National Down Syndrome Congress, and the Autistic Self Advocacy Network, among others.

Rep. Raul Grijalva told Bloomberg News that the administration expects the executive order to affect 200,000 to 300,000 federal contract workers. Demos suggests that there are 560,000 federal contract workers paid less than $12 an hour, but that doesn’t take into consideration that the order applies only to new hires beginning in 2015 and contains the exemption for 14(c) program disabled workers. In truth, a tiny portion of the work force will benefit from the executive order.

As the executive order stands, it seems that the president has taken an action that is much more symbolic than substantive. The president’s executive action can be seen as part of a larger phenomenon of entities—state governments, individual employers, and the White House itself—taking the initiative to raise the minimum wage in the face of gridlocked inaction in Congress. Now it is up to nonprofit advocates to convert the groundswell of public support for a higher minimum wage into legislation that gets through a recalcitrant U.S. Congress.—Rick Cohen