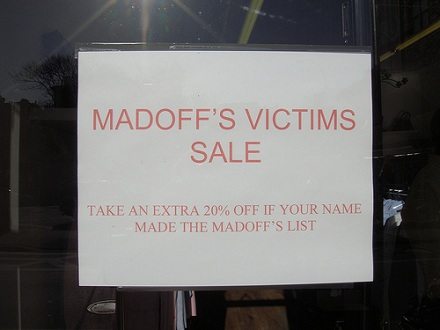 This article from the New York Post reports that, “According to a November 2011 tax filing, the Deborah and Andrew Madoff Foundation gave $176,000 to the Fidelity Charitable Gift Fund in December 2010 to meet giving requirements on $3.5 million in assets. The Mark and Stephanie Madoff Foundation, which controls $1.9 million, gave $79,000 to Fidelity.” However, the Post portrayed Fidelity as having turned down the gifts, perhaps not wanting to take the risk of having to be involved in any kind of potential “clawback” of those monies since both foundations are being sued by Irving Picard, the trustee charged with retrieving the funds that investors lost. Picard says that Bernie Madoff put $2 million of his dirty money into getting each son’s foundation up and running. This is perhaps small potatoes next to the $9.1 billion already recovered by Picard, but he is charged with recovering every possible penny. There are currently about $7.5 billion in allowed claims but that figure is expected to increase.

If the Post’s suggestion that the Madoffs transferred this money to meet payout requirements is correct, it would, in our opinion, violate the spirit of the payout rule and other dimensions of the distinction between the operations of private foundations and donor advised funds (DAFs). For example, when a private foundation makes a grant, it is identified and in theory described on the foundation’s 990PF. In this case, the Madoffs’ grants would have been identified as going to the 501(c)(3) gift fund, but that is really an intermediary to then make further distributions for which there is no mandate that they be specifically identified or attributed to the Madoff moneys. We don’t know the instructions given to Fidelity by the Madoffs, but if the Madoffs’ gift to Fidelity was meant to be held in an account rather than immediately allocated to other groups, that would take a current year’s foundation distribution and turn it into a DAF account that may or may not be spent in the year of the foundation’s grant decision. It is not clear how widespread such a practice is, but NPQ’s own Rick Cohen is looking into it. Donor advised funds are very solid instruments for charitable giving and, as NPQ has often written, the national sponsors are providing a very useful function in facilitating charitable giving. However, they aren’t meant to be used by private foundations to circumvent the purpose of private foundation payouts.

This article reports that before the suits were filed against the foundations, Fidelity’s charitable arm accepted more than $450,000 from Andrew’s foundation in 2008 and 2009. –Ruth McCambridge