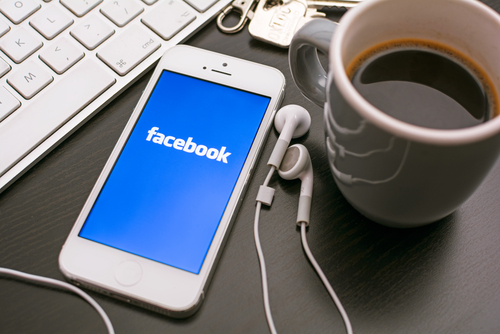 This story should be read in the context of another story about Facebook and the news covered by Debbie Laskey and G. Meredith Betz for NPQ last week. The combination of the two is a bit less neutral in terms of the future of independent journalism.

A new study from Pew Research shows some interesting shifts in where the younger generations are now receiving their news. Pew surveyed about 3,000 Americans and grouped the participants into Millennials (ages 18–33), Generation X (ages 34–49), and Baby Boomers (ages 50–69) to determine the habits of the respondents in these age ranges surrounding accessing news about politics and government. The results show a large decrease in the use of local television news by younger Americans and a big shift toward dependence on social media and online sources.

The study showed that about six in ten online millennials (61 percent) report receiving political news via Facebook on a weekly basis, a much larger percentage than turn to any other news source. 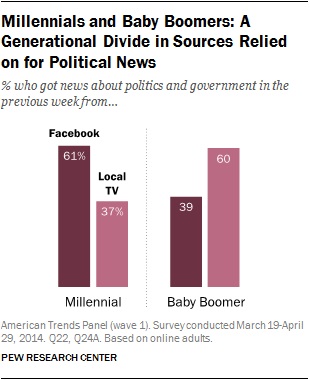 Although all age groups actively use Facebook, Millennials are much more likely to view political issues on their newsfeed. Pew Research reported that a quarter (24 percent) of Millennials who use Facebook said that at least half of the posts they view on Facebook relate to government and politics, which is higher than both Gen Xers (18 percent) and Baby Boomers (16 percent). Twenty-six percent of Millennials selected politics and government as one of the three topics they were most interested in out of a list of nine—less than Gen Xers (34 percent) and Baby Boomers (45 percent) selected. Pew notes that this age breakdown isn’t new: “People between the ages of 18 and 29 have expressed less interest in political news since at least 1996.”

Millennials also are less familiar with a majority of the 36 sources asked about in the survey, ranging from the New Yorker to Rush Limbaugh. The only news sources Millennials were more aware of were BuzzFeed and Google News. The graph below from Pew Research shows a fundamental shift from local television to Facebook and illustrates how the social network has become a key source for consuming politics news. 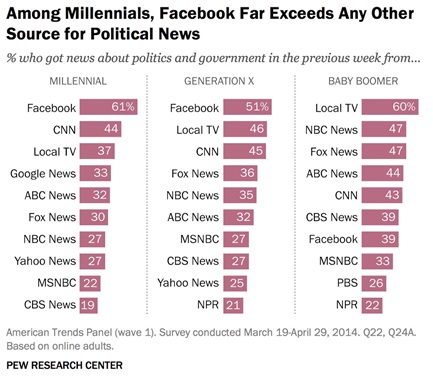 Despite the generational differences in how media is consumed, all generations express the same amount of trust in their news sources, with about 40 percent of each age group generally trusting their news and about 20 percent distrusting news sources.

As the 2016 elections draw near, it will become increasingly important for political candidates to keep an eye on these shifts in the digital spaces where younger Americans are now accessing their news.—Aine Creedon