Today, Forbes came out with its signature list of the 400 richest people in the U.S., and you will be glad to hear that their combined wealth has grown 15 percent to $2 trillion, up from $1.7 trillion in 2012. In fact, their combined wealth is the highest that it has ever been—the average net worth of those on the list is $5 billion, up from $4.2 billion last year. The stats can be found at forbes.com.

And today, the Census Bureau released its annual report on poverty, insurance and earnings, finding that 15 percent of US citizens exist below the poverty line. Income is down by 8.3 percent since 2007. 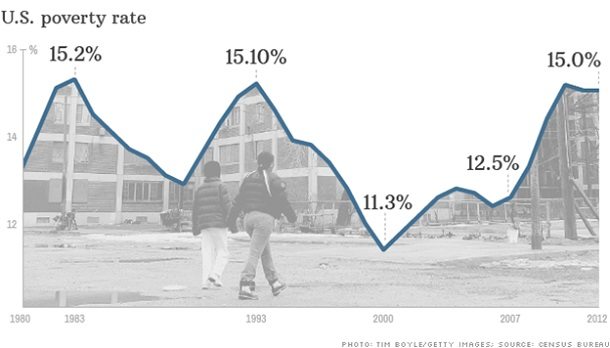 “The poverty and income numbers are a metaphor for the entire economy,” said Ron Haskins of the Brookings Institution. “Everything’s on hold, but at a bad level.” He added, “Don’t expect things to change until the American economy begins to generate more jobs.”

The New York Times reports that even as the economy expanded over the last four years, any income gains have accrued almost entirely to the top earners. The Census Bureau found that households making more than about $191,000 a year—have recovered most of their losses and are doing as well in 2012 as they did before the recession, while the lower 80 percent are usually making significantly less.

If you’re looking for a silver lining in these results, Jared Bernstein of the Center on Budget and Policy Priorities notes in his analysis that “for the first year since the Great Recession hit, things aren’t getting worse.” Of course,  “the bad news is that three years into an economic recovery, they’re not getting better either.”—Ruth McCambridge