Rescue of Detroit Institute of Arts Not a Done Deal 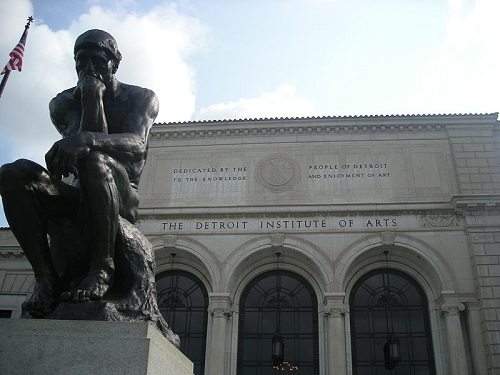 The Detroit Free Press reports that the fate of the Detroit Institute of Arts (DIA) remains uncertain after the release of the city’s bankruptcy restructuring plan.

While the plan includes a much-talked-about rescue effort by a number of philanthropic foundations to prevent the forced sale of any masterpieces and spin off the city-owned museum into an independent nonprofit, a number of critical steps remain before there is any final settlement, according to the paper.

First, representatives of city pensioners have to sign off on the deal, which promises a rescue fund of $815 million, with the Michigan legislature approving up to $350 million that would be included in the fund. “With each component of the grand bargain contingent on the other, the DIA still remains something of a pawn in a massive chess board laid out in [Kevyn] Orr’s plans to reshape Detroit’s finances and services to residents,” said the article.

One expert predicted negotiations continuing for weeks, with many changes. A federally mediated bankruptcy plan has been in the works since November, including $365 million from national and local charitable foundations. But the deal remains conditional on city pension representatives accepting financial concessions and details of the DIA Settlement, including changes in governance and financial oversight.

Some of those representatives have said they intend to continuing fighting for the right to sell DIA art off rather than support the foundations’ rescue plan: “Given the importance of the DIA art as a catalyst for Detroit’s overall recovery, it is vital that the full value of the collection be explored in order to generate potentially billions of additional dollars for the benefit of all creditors,” a financial adviser to two of the largest unsecured creditors in the bankruptcy told the Free Press.

However, proponents of the rescue plan are optimistic that pension representatives and the state would agree to the conditions of the grand bargain. DIA leaders praised the plan as a “win-win-win” that would help ensure the city’s quick exit from bankruptcy, benefit pensioners, and safeguard the museum, whose plight has been central in Detroit’s bankruptcy—the city has few assets it can leverage to raise cash, and the museum’s multibillion-dollar collection is owned by the city, the article explains.

U.S. Bankruptcy Judge Steven Rhodes must decide whether a plan “is feasible, equitable and ensures that the city has a viable future, which could include leaving cultural assets like the DIA off limits as critical to the city’s identity.” The argument has been that a forced sale of any of the museum’s irreplaceable treasures would permanently cripple the institution, causing donors to flee and prompting political leaders to rescind the property tax surcharge that provides about 70 percent of its budget.

This stark scenario is what led the group of foundations, including the Ford Foundation, the Kresge Foundation and the John S. and James L. Knight Foundation, to step in late last year and offer to buy the DIA and turn it into a private nonprofit cultural institution. While private foundations have a history of rescuing floundering private organizations, the intervention of philanthropists on behalf of a public municipality is unprecedented.

The Free Press reports that the proposed settlement includes the condition that the counties continue to collect the surcharge, and that there be governance and oversight structures at the DIA that include representation of the city, the foundations, and other stakeholders. Details have yet to be finalized.

The judge first proposed the plan as a way of raising hundreds of millions to reduce pension cuts for Detroit retirees: “It was designed to solve two of the thorniest problems in the bankruptcy: pensions and paintings. In exchange, no art would be sold, and the museum would sever its ownership ties with the city, ensuring that its collection would never again be put at risk by the city’s troubled finances.”

The question facing the city’s creditors is this one, according to the paper: “Do they want to take the $815 million being offered to help plug their unfunded liability…or try for a better deal in court, which…would have to involve the liquidation of the DIA.”

Last month, DIA leaders agreed to raise $100 million over 20 years for the rescue fund, a big challenge. As part of the deal, the DIA would be forbidden from ever moving its building or collection from Detroit. However, says the article, the DIA has long argued that its collection can’t legally be sold because, although its building and art are technically owned by the city, they are held in the public trust. While that argument was reinforced by Michigan’s attorney general, bankruptcy and art law experts tell the Free Press that the opinion might not hold up in court.

Some creditors say that shielding the art is unfair, given the magnitude of the city’s debt, and that the collection is undervalued. Some experts have said that entire collection is worth billions.—Larry Kaplan