Foundations Can Rewrite History by Focusing on the States 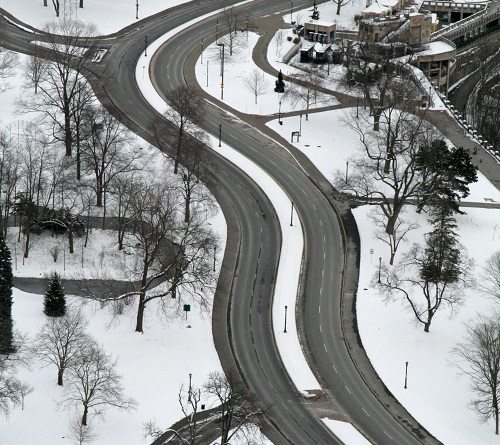 Like Robert Frost nearly a century ago, today’s foundation leaders stand where two roads diverge. They can continue down the usual road of fixating solely on federal policy debates, such as the one over the charitable deduction. Or they can take the road “less traveled by” to where the real action is: the states. If they choose the latter, then years from now they too can look back with Frost’s sigh of satisfaction because that choice will have “made all the difference”—for their missions, their grantees, and the individuals and communities they serve.

Federal vs. State: A General Look

This recent headline in Roll Call frames it best: “It’s the States, Stupid!” The article explains that “with the federal government rendered impotent by partisan gridlock and poor leadership—significant political and policy action is taking place at the state level.”

The data overwhelmingly confirm that the real action is in the states. In 2013, Congress passed fewer than 80 total laws (including naming post offices), while state legislatures adopted almost 40,000. That was not a one-time anomaly. For the previous two years of 2011–2012, Congress passed only 284 laws, while state legislatures adopted more than 69,000.

The federal inaction/state action dichotomy is illustrated by challenges to charitable deduction. There has been no threat at the federal level since the broader fiscal cliff debacle of 2012. True, President Obama’s FY 2014 budget proposal repeated his call for a 28 percent limit on all deductions (not just charitable), but that was the fifth time with zero traction. And yes, there are frightening aspects to the “discussion draft” tax reform package that House Ways and Means Committee Chairman Dave Camp released recently. Yet he “stood alone” when releasing it because everyone in Washington knows it’s not going anywhere. The Washington Post’s lead editorial proclaimed the proposal “dead on arrival,” and fellow Republicans, Speaker Boehner and Senate Minority Leader McConnell, have essentially declared it has no chance of being enacted this year.

Conversely, there have been—and currently are—active threats in the states with real consequences to foundations and their grantees. In 2013, there were significant challenges in multiple states where legislatures attempted to take away or limit charitable giving incentives. State associations of nonprofits in our network helped to secure hard-fought victories in Hawaii, Kansas, Minnesota, North Carolina, and Oregon.

But the battles are not over. Last year, at the end of its legislative session, Maine imposed a cap on all itemized deductions, including charitable contributions. The work of Maine’s charities now risks losing between $20 million to $30 million a year, a huge gap that foundations will certainly be asked to help fill. When Hawaii imposed a cap on all itemized deductions, the Hawaii Community Foundation estimated that it cost $60 million in charitable contributions, prompting the state to fix the problem last year due to the harmful consequences to the community. When Michigan’s legislature eliminated a longstanding tax credit, it cost charities $50 million. Bills are now pending in two states that could limit or eliminate charitable giving incentives as part of proposed tax reform overhauls. Unfortunately, the list could grow because, as seen in Maine last year, these threats often pop up at the last moment.

As these examples demonstrate, the costs of what is happening at the state level are too high to ignore. Plus, lessons learned at the state level can inform framing at the federal level. For instance, the threats considered and rejected in 2013 occurred in deep blue states and deep red states, showing that protecting charitable giving is a nonpartisan issue, a truth flagged in “The Lab Results Are in on Tax Reform” (The Hill, July 23, 2013).

Charitable Giving Incentives vs. Other State Threats and Opportunities

The real-world consequences of diminished charitable resources can be devastating for local communities. That’s why the Public Policy Agenda of the National Council of Nonprofits recognizes that protecting charitable giving is vital. But our agenda also recognizes that there are many other policy issues keeping nonprofit leaders up at night, threats that would limit their ability to deliver on their missions for their communities.

Foundations know the threats are broader than just charitable giving. According to a recent study by the Center for Effective Philanthropy, an overwhelming 76 percent of foundation executives surveyed regard the current government policy environment—along with the current economic environment—as the greatest barrier to their foundations’ ability to make progress.

But are foundations drawing the important distinction between the largely dormant federal and very active state government policy environments? Are they lamenting the barriers that prevent their grantees from successfully advocating for a worthy cause-related policy issue at the federal level? Or, asked another way, how many recognize the dangerous stealth shift underway by states and local governments to move public responsibilities and costs to nonprofits and foundations?

Consider, for example, this sampling of currently hot state policy issues that everyone in the 501(c)(3) community, charitable nonprofits and private foundations alike, should have on their policy radar screens:

How Can Foundations “Rewrite” History?

Informed public policy practitioners see the arc of history is being written in the states now when so little is being accomplished at the federal level. Unless more attention is devoted to the state policy level, the stealth shift of burdens onto nonprofits and foundations will reach a disastrous tipping point. Do the math: Foundations don’t have enough resources to fill the widening gaps, and their independence shouldn’t be pierced to force them to do so.

So what can foundations do?

Be data-driven: The real policy action is in the states.

Be inspired by Robert Frost’s poem: Make all the difference by taking the road less traveled of focusing on state policy. In doing so, you will be developing the capacity of grantees to engage on federal policy matters when the opportunities arise.

Or, if you prefer another American classic, be moved by Dorothy’s keen observation when she discovered that the allure of the far-off capital in the Land of Oz wasn’t so ideal. “There’s no place like home.” In other words, keep your policy eyes focused on the home of your foundation and where most of your grantees operate, rather than only on distant D.C.

Two additional steps for your journey ahead: