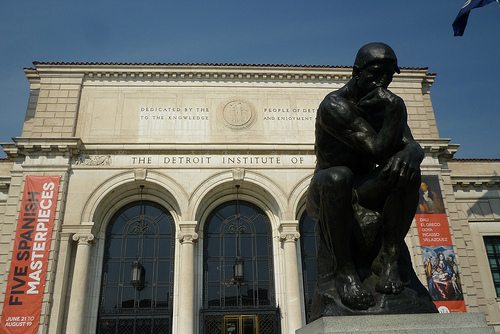 The New York Times reports that a group of national and local philanthropic foundations have officially made a much-anticipated commitment of $330 million to buy the Detroit Institute of Arts’ (DIA) renowned collection, helping the city avoid cuts to its retirees’ pensions, according to federal officials involved in the city’s bankruptcy proceedings.

The plan is considered a first both for foundations, which have never contributed much to shore up public-sector pensions, and in municipal bankruptcy cases. It demonstrated progress in the mediation with Detroit’s creditors to resolve the city’s financial crisis.

Nine foundations, many with ties to Michigan, have pledged to pool the $330 million, said the article. This would allow the city-owned Detroit Institute of Arts to avoid selling some of its collection to help Detroit pay $18 billion in debts, helping reduce a portion of its obligations to retirees, whose pensions are at risk of being reduced in the bankruptcy.

The foundations include the Ford Foundation, the Kresge Foundation and the John S. and James L. Knight Foundation.  Under the plan, which had been in the works for months, the museum would be transferred from city ownership to a nonprofit, protecting it from future threats. The deal stipulates that Detroit must put the money into its pension system, said the Times.

This wasn’t the first time charitable groups and high-profile figures have tried to help the city; Lloyd C. Blankfein, the CEO of Goldman Sachs, and billionaire investor Warren Buffett announced a $20 million initiative to help small businesses in Detroit back in November.

Possible roadblocks remain.  As much as $500 million may be needed to protect the art from an auction, officials told the paper, so additional donations are being solicited. Detroit has some 100,000 creditors in its bankruptcy, and some are expected to oppose the plan, which would still not be enough to resolve the underfunding, and only deal with a part of the bankruptcy, the largest municipal one in U.S. history.

Many see the plan as a positive development, and a sign that more agreements may be coming.  It has generated generally positive reactions from city leaders and pension officials, although others say that the deal gives pensioners priority over some other creditors, and that the city might get more for the art by selling it.

Last year, Christie’s auction house said that selling a portion of the DIA’s collection would generate $454 million to $867 million, and a group of creditors, including unions and financial institutions, will certainly challenge the appraisal in bankruptcy court. There were also some concerns over the transparency of the process, in that the plan was developed behind closed doors without a lot of public input.

The Times said that “even before Detroit filed for bankruptcy, the fate of the art collection—one of the few city assets that is both highly valuable and easily portable—became linked in the public mind with the fate of pensioners.  Yes, the art is a cultural and historical treasure, the reasoning went, but is it more important than payments people rely on for food and bills?”

The foundations said that the bankruptcy judge initially approached the Community Foundation for Southeast Michigan about the idea. Eventually, a group of foundations met in November in Detroit’s federal court building to discuss how much they would be willing to contribute.

The article quotes Darren Walker, director of the Ford Foundation—the nation’s second largest private foundation, with $11 billion in assets—who said that it was “unprecedented and monumental for philanthropies to undertake this kind of initiative,” but that “if there was ever a time when philanthropy should step up, this is it.”

At first skeptical, the foundation executives crafted a plan that they felt could work. Ultimately, the Knight Foundation committed $30 million, the largest single sum it has ever pledged.—Larry Kaplan