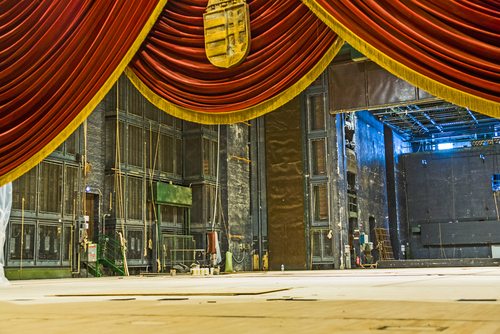 David Belcher reports in the New York Times on a number of opera companies that have been experimenting with smaller venues, including bare-bones “black boxes,” in an effort to make the art form accessible to broader audiences, while saving money on large-scale productions and minimizing the risk of mounting new works. Smaller venues have been pressed into service largely due to declining ticket sales and subscription rates—a trend being experienced by most traditional performing arts disciplines—and are proving to be a growth market in many places.

Deutsche Oper in Berlin, for example, converted a former backstage woodshop of the main opera house into a minimalist theater with 350 moveable seats and an adjustable performance space. The main house has 1,860 seats—far too many for some of the newer works they’ve offered, with as few as four musicians, or for the children’s productions they now plan to produce once or twice each year. And less intimidating for audience members who might prefer a 90-minute contemporary work to a five-hour Wagner opera.

At the Royal Opera House in London, where the best seats in the house cost nearly ₤200 (or about $320), the addition of a black-box space known as the Linbury Studio Theater provides “a nurturing ground for modern pieces,” which is good for both emerging artists and emerging opera-goers, who this month could have purchased tickets for a new work called “The Wasp Factory” for ₤20 to ₤35.

In addition to the examples Belcher cites, a quick search reveals a number of other opera companies experimenting with smaller as well as “unexpected” venues—virtually all in an effort to engage new audience members, and often while experimenting with the works of newer artists, or sometimes taking risks with older works presented in new ways.

Opera Philadelphia uses a combination of larger and smaller venues as well as some unexpected places (like Independence National Historical Park), to please long-term subscribers while at the same time attracting new audience members. Also with support from the Knight Foundation, a few years ago the company offered a series of “random acts of culture,” which not only delighted their random audiences, but also garnered unprecedented attention for the company through social media. This week the company premieres “Svabda” (“Wedding”), at the newly opened home of FringeArts, a former pumping station repurposed into a 230-seat theater; the one-hour production will be followed by a Balkan wedding reception, with traditional foods and live music and dancing for what is likely to be a largely non-traditional opera audience.

Finally, in Austin, two new opera initiatives are brewing: Austin Lyric Opera is launching the Pagliacci Project, which will bring live performances of Act II from Leoncavallo’s short opera to a variety of locations. And the brand-new One Ounce Opera has been formed with the intention of “taking opera literally to the people—instead of hoping they will somehow come to you,” through a series of “unique shows in unexpected locations.”

Julie Fiore, founder of One Ounce Opera, notes that while new works and smaller or unusual venues are about reaching more people through opera, they also change the way musicians experience performing opera: “There is no escape from the crowd…No set to hide behind, no elaborate costume or makeup—just you and your ideas.”—Eileen Cunniffe

More about: Arts and CultureFinancial Management