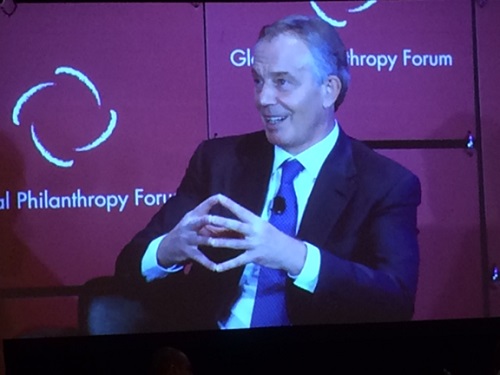 In his presentation to the participants in the Global Philanthropy Forum, and in the interview of him by GPF CEO Jane Wales, former UK Prime Minister Tony Blair didn’t raise, much less discuss, his role as the official representative of “the Quartet” (consisting of the United Nations, the European Union, the U.S., and Russia) charged with trying to guide Israel and Palestine to a two-state solution, with his personal function focusing on “spearhead[ing] transformative economic change” in the West Bank and Gaza. Nor did he veer into remarks about his enthusiastic support of the U.S. invasion of Iraq, nor an analysis of what it has done to disrupt chances for peace in the Middle East.

The theme of the GPF conference was “Disruptors and Decision-Makers,” and Blair unfortunately fits both categories, having been the partner of the Bush administration in invading Iraq. With an eye toward Blair’s work toward reducing interreligious conflict through his Faith Initiative, Jane Wales gave him an opening with a question to explain the attraction of extremist movements, citing the Islamic State as an example, but Blair didn’t take the opportunity to explain the nightmare of global instability that the Iraq war has exacerbated and cemented into the international landscape.

In his official remarks to the GPF crowd of foundations, social entrepreneurs, and NGOs, Blair focused on the task of building partnerships between government and philanthropy—the question, as he put it, of “How do we make government plus philanthropy mean more than two?” He described his frustrations during a decade in Downing Street, saying that the only thing more frustrating than dealing with government is running one, his increasing appreciation (becoming a “great fan”) of philanthropy, and his strategy while in office to encourage the growth of the third sector.

Blair defended government as the critical nexus in development, especially in a world in which technology and capital are essentially mobile. Government, he contended, is essential to whether a country develops or not. That means that philanthropy ought to be fashioning “genuine” partnerships with government. Suggesting that government is “slow” and “not very imaginative,” Blair said that foundations can bring innovative solutions to government where government is only able to go so far.

Focusing, like Wales did, on his work in Africa, Blair suggested that a distinguishing factor among the 50 or so nations on the continent is their governance, and a hopeful development is the emergency of a new generation of leaders in some countries that believes that the destinies of their countries are in their own hands. Blair twice referenced President Obama’s “Power Africa” initiative, which works in partnerships with African governments and the indigenous private sector toward increasing the electric power generation capacity in Africa and connecting 60 million homes and businesses to the electric power grid.

Like many speakers at the conference, Blair called for focusing on investment in Africa’s infrastructure. He cited planned transportation and power investments of significant scale, such as the East Africa railway project, that will “liberate” these nations the way small infrastructure investments cannot. If, as he says, the key to eliminating poverty in Africa is through building its infrastructure, and the distinction between countries that are progressing and those that are not is the quality of government, Blair says that it is critical to put expertise into government. His African governance initiative helps governments identify their problems, sort out their priorities, and restructure themselves so that they can devote their time and energies to the priorities at hand.

Blair’s presentation, scratching his chin throughout, complementing Wales and the audience for their good questions, was generally platitudinous and not very revealing about what he knows about—and not only concerning the situation in Iraq, whose continued deterioration can be traced back to the invasion. Moreover, when addressing topics of development like those addressed by the GPF, speakers probably ought to identify their interests and conflicts, just so the audience can accurately gauge their content, and in this case, Blair wasn’t quite so clear about his multiple identities.

Philanthropy as practiced by politicians or former politicians is rarely pristine, as multiple news reports about the Bill, Hillary, and Chelsea Clinton Foundation have recently revealed. The same goes for Blair (and his two foundations) and his wife Cherie (and her one foundation focused on women’s empowerment). Like multiple other sources, the Center for Global Research, based in Canada, has published an article about the linkages of a Qatari mobile telephone company with Blair and his philanthropic and Quartet roles. Apparently, the Qatari company, Ooredoo (formerly Qatar Telecom), has been a donor to and worked with Cherie Blair’s foundation, though neither it nor the foundation will reveal the size of the donations. Ooredoo is a “long-standing client of JPMorgan” where Blair is a £2 million a year advisor. Blair prioritized a contract for Ooredoo as part of the Quartet’s position, including pushing Israel to allocate bandwidth space for the company.

While the GPF performance emphasized Tony Blair the philanthropist and Tony Blair the statesman, it didn’t address the parts of his role that make both of those complex and subject to a skeptical eye. It’s Tony Blair Associates, the business side of the former prime minister, which leads critics to question his philanthropic and diplomatic roles. Like his consulting relationship with JPMorgan, Blair has many other business entanglements, such as lucrative consultancies negotiated with Kazakhstan, Kuwait, Abu Dhabi and, more recently, Serbia.

The difficulty with Blair is that whenever he appears, which Blair is it? For example, one writer noted that “he…spends much of his time in the Middle East, especially the Gulf, on other business—on speaking or consulting contracts and as JP Morgan’s man: Blair tends to wear several hats at once.” When he meets with the Emir of Kuwait, is it as representative of the Quartet, founder of the Tony Blair Faith Foundation, or the consultant to big businesses? Observers hint that Blair’s role with the Quartet is merely a “calling card” that gives him access to wealthy countries that are willing to pay big fees for his advice and, probably more likely, his connections.

That is the problem with a Tony Blair speech at the Global Philanthropy Forum. When he talks about the new, inspiring leadership in Africa, is he talking as a philanthropist working with his “team” on governance issues? Or is this Blair as influence broker, helping by his mere presence to burnish the images of sometimes less than salutary leaders, such as former Nigerian dictator Muhammadu Buhari, whom Blair met with just before the Nigerian elections, the late Muammar Qaddafi in Libya, and Ethiopia’s Menes Zenawi, just to name a few?

Some GPF attendees were enthralled by Blair’s description of the “rhythm of change”—at the beginning, it is thought impossible; while implementing change, “doing it is hell”; and when the process is done, you wish you had done more. Conference participants took note of his recommendation that the “whole reinventing government” movement has to be revived, and government has to engage with business and philanthropy across a broad range of partnerships. People nodded when he asked, “How do you get government to open up better to innovative thinking?” But the comments were generally platitudes, without clarification of which Tony Blair was speaking or which philanthropic or business client’s learning he was drawing on to explain the value of partnerships.—Rick Cohen