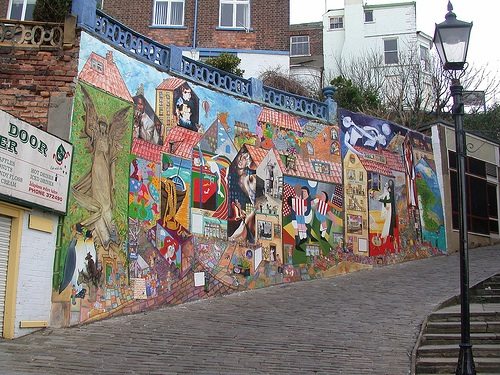 Mural arts programs have felt the same funding squeeze as other nonprofit arts organizations in recent years, with foundation, corporate and government funds shrinking. Some, however, are finding creative solutions to continue the work of making public art while building community spirit.

In Mansfield, Mass., individual donors who contribute $100 or more can have their names incorporated into a mural depicting the history of the town, which will beautify an underpass adjacent to the business district. When the mural is finished, the donor names will be legible up close, but just part of the bigger picture from a distance.

In Philadelphia, businesses and other organizations can help to underwrite the far-reaching efforts of the City of Philadelphia Mural Arts Program by hosting a group “paint-by-numbers” event in an easily accessible indoor venue.

The Mansfield Mural Project—part of the Keep Mansfield Beautiful initiative—has already raised $20,000 toward its $50,000 goal. Volunteer talent is another way to contribute; artist Ian Gaudreau has invited aspiring artists of all skill levels to work with him to create the mural, while at the same time learning from a professional muralist. In addition to the volunteer artists, members of the community can support the project in a number of other ways, from documenting the work-in-progress with photographs, to helping with social media or fundraising, to donating or providing storage space for materials.

The City of Philadelphia Mural Arts Program, which evolved from the city’s Anti-Graffiti Network, has been going strong for nearly three decades and is the largest public art program in the United States. With more than 3,600 murals in every corner of the urban landscape, its collaborative approach to mural-making has become an essential part of the city’s DNA. Artists and civic leaders from around the world have visited Philadelphia to learn how to establish, grow and sustain mural programs. Still, as an agency of a cash-strapped municipal government, the Mural Arts Program has had to tighten its belt in recent years. A separate nonprofit, Philadelphia Mural Arts Advocates, has experienced the same fundraising challenges as the rest of the arts community, leading this public/private venture to look for new sources of revenue.

Nearly two years ago, Mural Arts opened a studio space in The Gallery, a downtown shopping center. In addition to being the gathering place for Mural Arts Trolley Tours and housing a small gift shop, this space allows community members to participate in mural making, usually for free. (Since 1990, their murals have been painted in sections on panels of parachute cloth, then applied to walls and finished with a protective coating.) Recently, they started a new revenue-generating activity at the studio space: Groups may pay to host private paint-by-number events in the space. Guests may start with cocktails and hors d’oeuvres, but will wind up donning plastic aprons and gloves and painting sections of an actual mural. They see the artist’s rendering of what the finished mural will look like and hear from Mural Arts staff about the collaborative process that led to the community-sanctioned design of that particular mural. And while they don’t get to sign their names, they do have the satisfaction of knowing that somewhere down the road when they take a trolley tour or drive by the finished mural, they’ll be able to point to their artwork and say, “I helped with that.”—Eileen Cunniffe