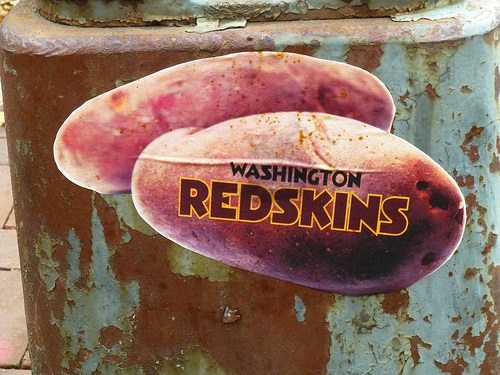 Conflict of interest and confused histories are the bane of some writers. For Daniel Snyder, the tough-guy owner of the National Football League franchise in Washington, D.C., that persists in calling itself by a racial epithet insulting to Native Americans, the follies of trying to legitimize the use of a racial slur just keep on coming. Snyder has fumbled with the creation of an ersatz Native American foundation with his team’s name built into it and stumbled with an effort to get people to tweet how much they liked the team’s name, and now he continues to bumble with the recruitment of a blogger from the left to defend the racial slur.

A couple of weeks ago, Snyder hired a liberal blogger named Ben Tribbett to write in defense of the name. Two weeks after starting his new gig for Snyder, Tribbett resigned, blaming “personal” criticisms and “political attacks” that he said had become a “distraction.”

On his Twitter account (under the weird Twitter handle @notlarrysabato, a reference to widely known University of Virginia political scientist and political commentator Larry Sabato), Tribbett announced the termination of his Snyder gig on Twitter late at night on July 7th:

Obv. this issue with Redskins is one where I don’t see eye to eye with some friends. I just don’t agree with the attacks on the team name.

I don’t want to be a distraction to the team as the political attacks have shifted towards being personal towards me.

So I’m going to send in my resignation to the Redskins. Hopefully that allows debate to move back to where it should be.

PS- Hail to the Redskins!

Interesting, but @notlarrysabato’s social media world isn’t that cut and dry. Tribbett’s concern about personal attacks is interesting, since he described himself (prior to signing up for a job with Snyder) as a “vicious campaign insultant.” That sort of works when you’re defending a racial epithet.

To be clear, Tribbett wasn’t only lured by the money. He’s apparently been a defender of the racist name for some time. In 2013, he posted the following, as reported by the Washington Post:

The odd part of the story is that Tribbett is otherwise a liberal, albeit maverick, political commentator. Although he once worked for Republican politician Pete Snyder’s New Media Strategies, Tribbett’s LinkedIn profile notes his role as CEO of Pinpoint Technology, a firm geared to using new media to generate voter turnout, and his past work (he says) as executive director—albeit for only nine months—of Accountability Now PAC, which is described as co-founded by Glenn Greenwald, whose work on transparency and accountability in association with Edward Snowden has been a frequent topic of NPQ Newswires.

Besides appropriating Larry Sabato’s name, Tribbett’s biggest claim to fame is having been the blogger who first reported on former Republican Senate candidate George Allen’s use of the “macaca” slur, a term used by the candidate to refer to an Indian-American critic. Indian Country Today notes that Tribbett had to actually explain and educate the public how “macaca” was meant as a slur.

On his Facebook page, Tribbett self-identifies as a “professional poker player,” a description he has used before, according to other sources. Indian Country Today discovered some of his poker-playing tweets that tend to make his defense of the lack of racial vitriol in the Snyder team name a little suspect. Here are some of those tweets from one gambling incident, reportedly at a blackjack table:

An older native american guy just accused me of cheating and pulled some stuff out of his pocket to put some kind of spell on me. Epic.

Just took Chief for his last 300. I’d call it a scalping but that seems uncalled for.

“Good lesson in public relations here: if you hire someone to defend your nickname which is under attack for being racist, make sure they don’t have highly questionable tweets living out there.”—Rick Cohen