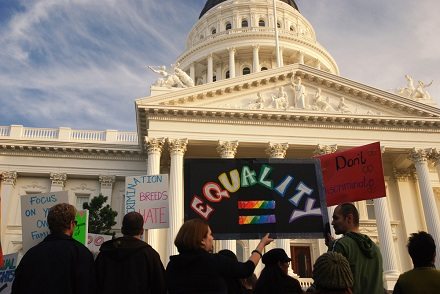 Five lesbian and gay couples filed suit in the Eastern District of New York Monday, challenging Section 3 of the federal Defense of Marriage Act (DOMA), which prevents American citizens from sponsoring same-gender spouses for legal permanent residency in the U.S. The lawsuit, filed on the couples’ behalf by the nonprofit Immigration Equality and the law firm of Paul, Weiss, Rifkind, Wharton & Garrison LLP, alleges that DOMA violates the couples’ constitutional right to equal protection.

“Plaintiffs are five committed, loving couples, lawfully married,” the complaint begins. “In each couple, one spouse is an American citizen and the other spouse a foreign national. If they were different-sex couples, the federal government would recognize the foreign spouse as an ‘immediate relative’ of a United States citizen, thereby allowing the American spouse to petition for an immigrant visa for the foreign spouse and place the foreign spouse on the path to lawful permanent residence and citizenship. Solely because of DOMA and its unconstitutional discrimination against same-sex couples, however, these Plaintiffs are being denied the immigration rights afforded to other similarly situated bi-national couples. This is an action to remedy that hateful, harmful, and unlawful discrimination.”

All the couples have been together for well over a decade and have done everything they could to secure their relationships legally in the U.S., including getting married in Connecticut, New York and Vermont, states where same-gender marriages are recognized.

Last year, the Obama administration said that it would no longer defend DOMA in court, because it believes the law to be unconstitutional. However, the law remains on the books, forcing an estimated 28,000 bi-national couples to live with the anxiety of deportation. These are loving couples that live in constant uncertainty, often apart from each other, denied the feeling of stability that should be a byproduct of marriage.

“These families represent the tens of thousands of others like them who are threatened with, or have already been forced into, separation or exile,” said Rachel B. Tiven, executive director of Immigration Equality. “Their victory in court will end the threat that has hung over their families, their homes and their marriages for far too long.”

This lawsuit and others challenging DOMA will likely end up in the Supreme Court, which will once and for all decide whether lesbian and gay couples should continue to be treated differently than other citizens. –Erwin de Leon