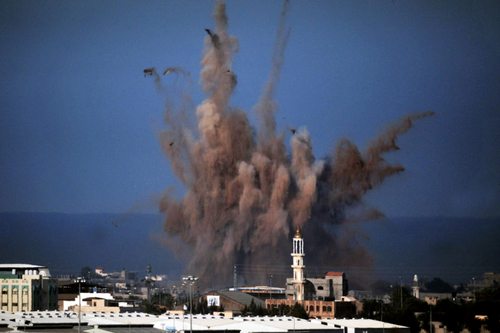 Back in 2010, Israel received backlash and heavy criticism for their actions imposing a naval blockade on the Gaza strip and a resultant deadly raid. In an attempt to break the blockade between Israel and Egypt, the Gaza Freedom Flotilla was organized to bring humanitarian aid and construction materials directly to Gaza. Organizers of the effort included the Free Gaza Movement and the Turkish Foundation for Human Rights and Freedoms and Humanitarian Relief (İHH). However, Israel choose to not accept the organizers’ motives and instead, offered to allow the goods to be received in an Israeli Port to be inspected prior to delivery by land to Gaza. The leaders of the Flotilla effort refused this offer andIsrael took the flotilla by force, resulting in nine deaths.

Israel’s actions were said to constitute war crimes by supporters of the Flotilla and the International Criminal Court began an investigation to see if formal charges were warranted. In the end, Fatou Bensouda, the prosecutor leading the ICC process, announced his decision to end the proceedings in a statement issued recently, saying these cases “would not be of sufficient gravity to justify further action by the ICC”:

“Following a thorough legal and factual analysis of the information available, I have concluded that there is a reasonable basis to believe that war crimes under the jurisdiction of the International Criminal Court were committed on one of the vessels, the Mavi Marmara, when Israeli Defense Forces intercepted the ‘Gaza Freedom Flotilla’ on 31 May 2010…. [However,] without in any way minimizing the impact of the alleged crimes on the victims and their families, I have to be guided by the Rome Statute, in accordance with which, the ICC shall prioritize war crimes committed on a large scale or pursuant to a plan or policy.”

Reactions to this ruling mirrored the controversy about the Aid Flotilla. Turkish lawyer Ramazan Ariturk, who represents Comoros, under whose flag the Flotilla sailed in the case, said, “This is a moral struggle that we’re pursuing by ourselves. It’s a legal struggle, a struggle in the name of humanity. This struggle isn’t over,” he told reporters in Istanbul. “We will object to a higher court at the International Criminal Court and we believe without a doubt that we will prevail.”

The Israel Foreign Ministry countered in its statement that “the examination conducted was preliminary only, and the prosecutor decided to close the file without seeing a need to address the issue of resort to self-defense by IDF soldiers who were confronted, as mentioned in the report, by violence from İHH activists in the context of a flotilla which the prosecutor considered as not constituting a humanitarian mission.”

With the needs of the citizens of Gaza greater than ever in the wake of the recent hostilities, the challenge of bringing aid to Gaza remains before the international community. The recent weeks of heavy conflict heightened Israel’s desire to control the flow of aid. Israel’s fear that aid would be directed toward Hamas’s military requirements rather than meet the people’s needs was increased by the uncovering of a large network of well-built tunnels leading from Gaza into Israel during the months leading up to the Gaza conflict.—Marty Levine